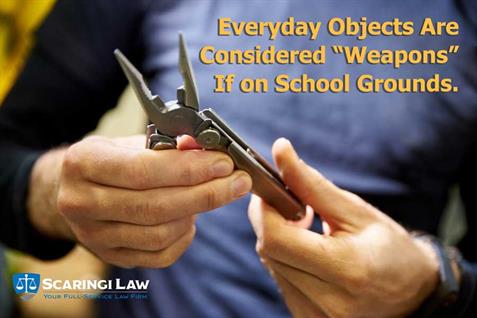 Under Pennsylvania law, sometimes the location of a certain activity can make it a crime when it would not otherwise be. One good example is the offense of “Possession of weapon on school property.” Pursuant to 18 Pa.C.S. 907, “weapons” include “any knife, cutting instrument, cutting tool, nun-chuck stick, firearm, shotgun, rifle and any other tool, instrument or implement capable of inflicting serious bodily injury.” This means everyday ideas that people carry maybe considered a weapon, a common pocket knife or a box opener left in a pocket from work as examples.

The majority of the items described herein as weapons could be lawfully possessed outside of school property. As soon as one traveled onto school property, though, a crime has commenced. I actually had a case a few years back in which someone was charged with this offense for having a set of nun-chucks at a youth football game. I explained to the district attorney that my client was actually just showing the nun-chucks and, for lack of a better term, “playing” with them on the sidelines. No one was threatened by them or reported an attempted assault or anything of that nature. Frankly, it was an overzealous school resource officer who resorted to criminal charges instead of what may have been a lesser intervention. At any rate, the district attorney agreed to reduce the charges and offer a fine and probation as the sentence instead of potential jail time.

Be careful what you possess when on school property, and if you run afoul of this law, contact Scaringi Law’s experienced criminal defense attorneys at 717 657 7770 to fight for you.