Entrapment, It Does Happen. 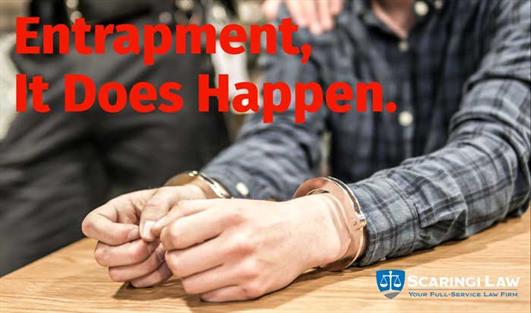 I have had many a defendant in a criminal case seek my counsel and ensure me that the defense should be easy, as the police “entrapped” them. Unfortunately for these defendants, in the great majority of cases, they were not actually entrapped – at least as the law defines it.

The relevant portion of Pennsylvania’s Entrapment statute is as follows:

(a) General rule. — A public law enforcement official or a person acting in cooperation with such an official perpetrates an entrapment if for the purpose of obtaining evidence of the commission of an offense, he induces or encourages another person to engage in conduct constituting such offense by either:

(1) making knowingly false representations designed to induce the belief that such conduct is not prohibited; or

(2) employing methods of persuasion or inducement which create a substantial risk that such an offense will be committed by persons other than those who are ready to commit it.

Case law has further defined this defense to criminal prosecution. Long story short, to successfully utilize this defense, you must be able to prove that police somehow caused you to commit a crime that you were not already predisposed to commit. The police merely giving you the opportunity to commit a crime, such as when they set up controlled buys of drugs with a known drug dealer, does not constitute entrapment. If, however, police in some way convince someone that has never sold drugs, and who is not otherwise predisposed to start selling drugs, to obtain drugs and sell to the police or their informants, this would be a potential entrapment situation.

I represented a college student who was charged with selling a very small amount of marijuana. He showed me the text message exchange leading to the sale. The “buyer” was my client’s former friend who had, himself, been busted selling drugs and was trying to tell police he could land them another drug dealer (my client, allegedly). My client was clear with the “buyer” that he does not sell drugs. Only after extended badgering and convincing did my client eventually give in and tell the “buyer” that he would spare some of his own stash to sell to the “buyer.” I confronted the district attorney with this evidence and we were able, as a result, to reach a favorable plea deal for my client in which he avoided a felony and was able to stay enrolled at his college.

If you believe police entrapped you to commit a crime, contact Scaringi Law 717 657 7770 immediately.