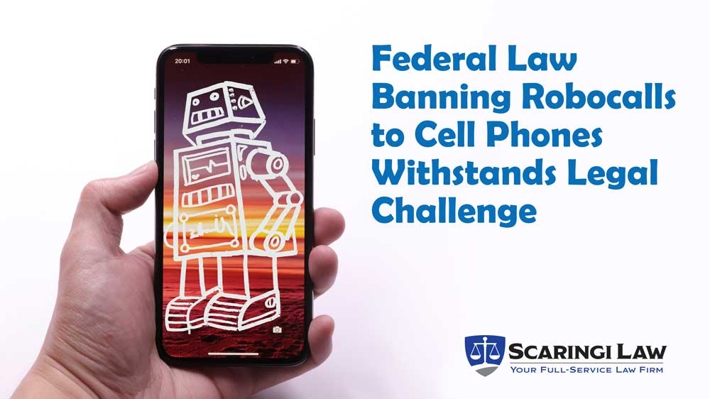 In the case called, BARR v. AMERICAN ASSN. OF POLITICAL CONSULTANTS, INC., the United States Supreme Court upheld the Constitutionality of the Telephone Consumer Protection Act of 1991, known as the TCPA, which generally prohibits robocalls to cell phones. It found that one amendment to the TCPA to be in violation of the 1st amendment and as such severed that amendment, held just that amendment to be unconstitutional, and permitted the remainder of the TCPA to stand. Thus, robocalls to cell phones still violate the TCPA.

Who sued whom? The American Association of Political Consultants sued the federal government claiming that the TCPA violates the 1st Amendment to the U.S. Constitution’s guarantee of free speech.

What is the law on free speech? Ratified in 1791, the First Amendment provides that Congress shall make no law “abridging the freedom of speech.” The US Supreme Court held in 1972, that above “all else, the First Amendment means that government” generally “has no power to restrict expression because of its message, its ideas, its subject matter, or its content.” The Court’s precedents allow the government to “constitutionally impose reasonable time, place, and manner regulations” on speech, but the precedents restrict the government from discriminating “in the regulation of expression on the basis of the content of that expression.” Lastly, the Court has held that content-based laws are subject to strict scrutiny, meaning content-based laws on speech are only permitted if they satisfy a compelling state interest.

The Plaintiff was trying to get the entire TCPA struck down as unconstitutional so that their member political consultants could legally conduct robocall campaigns to the cell phones of potential voters. So, they zeroed in on a 2005 amendment to the TCPA, which exempted robocalls made for the purpose of collecting government owed or guaranteed debt, including robocalls made to collect many student loan and mortgage debts. The Plaintiff claimed that exemption for the collection of government debt was not content neutral and as such violates their 1st Amendment rights and as such the entire TCPA should be declared unconstitutional. If the court agreed and declared the TCPA unconstitutional then the Plaintiff and all other individuals and groups could make robocalls to your cell phones.

Remember laws cannot restrict speech based upon content; they must be content-neutral to pass constitutional muster. In this case, the Plaintiff pointed out that their speech – speech that discusses candidates and issues, solicits donations, conducts polls, and gets out the vote – is prohibited to be conducted via robocalls – but that the government’s speech – requests, demands, encouragements of debtors to pay their government owed debts – is permitted to be conducted via robocalls and thus the law discriminates based upon the content of the speech.

The U.S. Supreme Court, in an opinion written by Justice Kavanaugh, agreed with the Plaintiff. The Court held, “Because the law favors speech made for collecting government debt over political and other speech, the law is a content-based restriction on speech.” The Plaintiff asked the court to strike down the entire robocall ban from the TCPA. But, the Court found that would defeat the purpose of the law, which is to protect consumers from being harassed by robocalls. As such the Court simply severed the offending 2005 amendment, which had unconstitutionally carved out an exception from the robocall ban.

Thus, the government call no longer conduct its debt-collection efforts via robocalls to cell phones and we Americans continue to be protected by the overall robocall ban set forth in the Telephone Consumer Protection Act of 1991.