When Was Your 302 Mental Health Commitment? 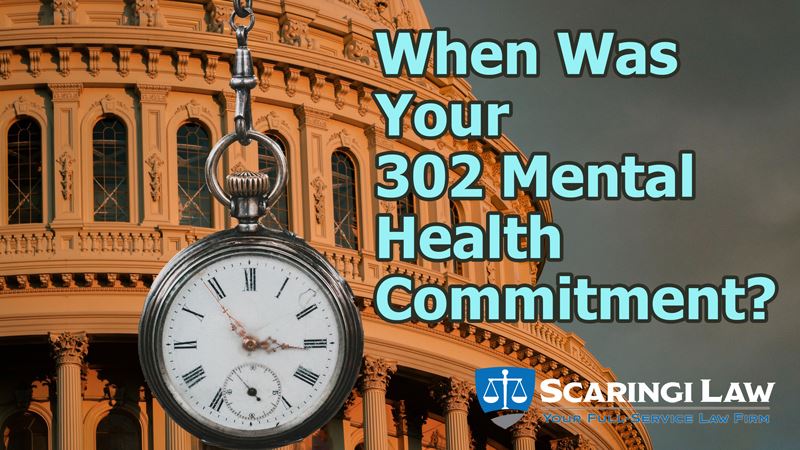 This has become a very important question since the Pennsylvania Superior Court issued a landmark decision on the limitation period for filing a petition to expunge an involuntary mental health commitment effectuated under Section 302 of Pennsylvania’s Mental Health Procedures Act.

In the wake of the COVID-19 pandemic and the civil disorder and violence across the United States following the police killing of George Floyd, I’ve spoken to many people who, understandably, have attempted to buy firearms, but were denied because they had previously been the subject of an involuntary mental health commitment under Section 302.

Both the Federal Gun Control Act and the Pennsylvania Uniform Firearms Act disqualify persons who have been “committed to a mental institution,” in the language of the federal statute, or who have “been involuntarily committed to a mental institution for inpatient care and treatment under section 302, 303 or 304” of the Mental Health Procedures Act, in the language of the state statute, from possessing or transferring a firearm (“possess, use, control, sell, transfer or manufacture or obtain a license to possess, use, control, sell, transfer or manufacture a firearm in this Commonwealth,” in the language of the Pennsylvania UFA). Consequently, a person who has been the subject of an involuntary mental health commitment is permanently barred, in the absence of some action to restore his/her firearms rights, from buying, possessing, using, or selling a firearm. The definition of “firearm” is expansive, covering virtually every device capable of discharging a projectile through the energy of an explosive.

The most direct means of challenging an involuntary mental health commitment in Pennsylvania is a petition to expunge—that is, to erase—the commitment and any record of it. A successful petitioner would have his or her firearms rights restored, assuming he or she were not disqualified under any other provision of law.

Most legal actions, whether civil or criminal, must be commenced within a certain period of time, referred to as the period of the statute of limitation. An exception to this general rule is the statutorily authorized petition to expunge a mental health commitment, as to which there is no legislatively enacted statute of limitation. Attorneys on both sides of these issues were left to speculate as to what the limitation period courts would enforce. The Superior Court resolved this uncertainty on March 6, 2020, when it ruled, in In re P.M., that the six-year “catch-all” statute of limitations contained in the Pa. Judicial Code applies to petitions to expunge mental health commitments. This means that if your involuntary mental health commitment happened more than six years ago, any petition to expunge that commitment will be barred by the passage of time.

It now remains to be seen the extent to which wrinkles will develop in the law governing this limitation, which will be the subject of a future article.

If you have questions about the consequences of your involuntary mental health commitment, call our office at 717 657 7770 to ask about a free consultation.