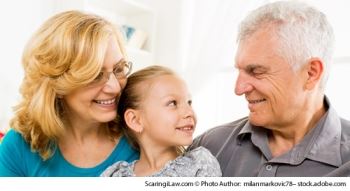 By Marc Scaringi of Scaringi Law posted in Family Law on Thursday, December 22, 2016.

It was a little-known fact that grandparents in Pennsylvania could gain standing (i.e. sue for custody) in child custody cases based merely upon a child's parents being separated for at least six months or commencing a divorce proceeding.

Under either of these very common scenarios, grandparents from either side of the family could come into Family Court and petition for at least partial physical custody of the child.

Such was the law under Section 5325 of Pennsylvania's Grandparents Rights Act, until one part of this key provision - the part that affords standing to Grandparents if the parents are separated for more than 6 months - was challenged and overturned by a recent Pennsylvania Supreme Court decision.

It seems clear from the majority and concurring opinions that the other part of Section 5325 - the part that affords grandparents standing in the event the parents have commenced a divorce proceeding - will also be struck down.

It took one set of parents -- identified only as D.P. vs. G.J.P. -- to challenge the standing provision of the Pennsylvania's Grandparents Custody Rights Act. For now, their victory in the case was only partial.

The Supreme Court explained that parents have a fundamental Constitutional right to parent their children; that right means the parents decide who shall have custody and provide care for their children. The Court further explained the state does have parens patria authority to legislate in child custody; but absent parental abuse, neglect or unfitness, the state should not interfere in the parents' decision regarding whom their children may associate with, including the children's grandparents.

The Court reasoned that because the Section 5325 standing provision does not require proof of parental unfitness or that the children are at risk of harm this statutory provision is not narrowly tailored to effectuate a compelling state interest, which is the legal standard, and as a result must be struck down.

This case is a strong win for parental rights. Importantly, in the concurring opinions two Justices said the Court should have gone further. These Justices said the Court should have used the same reasoning to strike down as unconstitutional the second part of section 5325 that affords standing to grandparents of divorcing or divorced parents. Because the parents in D.P. vs. G.J.P. did not initiate a divorce action the Court could not rule on the constitutionality of that second part. However, the two Justices flashed a green light to divorcing or divorced parents who wish to challenge the second part of Section 5325.

The former Mother-in-Law has now filed an Amended Complaint citing among other grounds the second part of 5325 - the parents have divorced - as grounds for her request for partial physical custody. I have filed preliminary objections challenging the constitutionality of the second part of Section 5325 using the same reasoning the Court struck down the first part of Section 5325 . There is no reason my client's parental rights should be usurped by her former Mother-in-Law simply because my client is divorced. I am confident the Courts will agree with me and extend the decision in D.P. vs. G.J.P., denying grandparents standing, to cases in which the grounds alleged are that the parents are divorced.

I don't believe grandparents petitioning for custody standing will find much future success under any part of Section 5325. Yet, this doesn't mean grandparents are suddenly impotent.

Grandparents still enjoy some very powerful legal ammunition. Section 5324 gives standing to grandparents who have or will to assume parenting duties of a grandchild, if the child is declared a dependent of the state, the child is substantially at risk due to parental abuse, neglect, drug or alcohol abuse or incapacity, or the child has resided with the grandparents for 12 consecutive months and is then removed from the grandparents' residence by the parents.

In some ways, this clause makes sense. Grandparents who give good homes to a grandchild judged dependent under juvenile dependency laws should have standing to seek up to full custody. In such cases, county Children and Youth officials have intervened to protect a child's welfare, and a court has judged the child to be a dependent ward of the state.

The same could be said for children who haven't been ruled dependent, yet are deemed to be at risk due to a parent's incapacity or drug or alcohol abuse. Their grandparents should have standing to seek custody, provided they can prove the child is at substantial risk of harm if left in the care of the parents. In both cases, I believe these children would be better off being raised by caring grandparents.

But another clause in Section 5324 is much more troublesome. It gives custody standing to grandparents when the grandchildren have resided in their homes for at least 12 consecutive months and the parents have then removed their children from the home.

Problematically, this clause again gives grandparents standing even if the parents are perfectly fit parents. What happens if young working parents are relocated overseas on a 12-month job assignment and leave their child with the grandparents. And what about parents who seek temporary childcare help to attend school? When the parents return home to resume care of their child, the grandparents could sue them for full custody! This standing provision may discourage parents from seeking this kind of temporary help from a child's grandparents. Let's face it, problems with housing, job status or even a personal issue can compel many parents to place their children with the child's grandparents until such issues can be resolved.

Finally, there's the thorny matter of a case I'm now handling. Here, my client, the mother and the father had the baby while living in father's parents' home. Mother lived there for a few months after birth and then separated from the father and moved out of the home; the father remained residing with his parents and the child. My client sued the father for custody and obtained several custody orders conferring upon her various levels of custodial rights including most recently, primary physical custody, at the mother's residence. The father recently moved out of his parents' home.

As soon as the father moved out, the paternal grandparents filed suit against their son and my client, the mother, for custody of the child! Paternal grandparents cite this third part of Section 5324 as grounds for standing. I will argue that during the father's court-ordered custodial period the child was living with the father, who happened to reside at his parents' residence. I hope to prevail. But the stakes are huge for the child and my client. The paternal grandparents could receive full custody of the child under Section 5324. The clear injustice of this Section is why I am challenging it as a violation of my client's - the parents - fundamental, constitutional right to provide care and custody of her child. The father is joining us in the challenge!

Marc Scaringi, Esquire, is principal and Managing Shareholder of Scaringi & Scaringi, P.C., a full- service law firm with 16 attorneys working out of five offices in Harrisburg, Newport, Carlisle, York and Lancaster. He can be reached at (717) 775-7195 or at info@scaringilaw.com