DLI Revised Regulations Could Change How PA Employees Are Paid 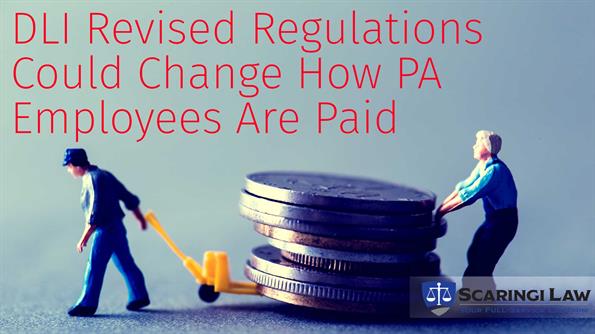 The Department of Labor and Industry recently proposed changes to the regulations governing the Pennsylvania Minimum Wage Act ("PMWA"), specifically the job duties that must be performed for an employee to qualify for the executive, administrative, and professional exemptions ("EAP exemptions"). The federal Fair Labor Standards Act ("FLSA") also defines the EAP exemptions, but unfortunately the DLI's proposed definitions for the PMWA's EAP exemptions are not identical to those in the FLSA, creating ambiguity and risk for Pennsylvania employers. The DLI also proposed increasing the minimum weekly salary required to meet the PMWA's EAP exemptions from $455 to $921. Because most exempt employees fall under one of the EAP exemptions, this proposal would significantly affect how salaried employees are paid in Pennsylvania and likely result in job losses or other unpleasant results for employees.

Weekly Minimum Salary Increase to Qualify for the EAP Exemptions. Presently, the minimum weekly salary required to meet the EAP exemption in Pennsylvania is $455 per week, which is the same minimum currently required by the FLSA. The proposed rulemaking seeks to increase that amount over a three-year period, ultimately setting the minimum at $921 per week. That means that over a three-year span, Pennsylvania employers who have properly classified employees as exempt under the current EAP regulations will either need to: (1) significantly increase employees’ salaries to maintain the exemption; or (2) lose the exemption and be required to pay significant amounts of overtime. Unfortunately, this is almost certain to result in job losses. For example, a company that previously employed three salaried employees to each work 50 hours per week may decide to continue to employ only two employees, raise their salaries to the new minimum threshold, schedule them to work 65 hours per week, and expect them to work even harder. This scenario is unpleasant for both the retained employees and the terminated employee.

It is unlikely that many presently exempt employees who earn less than $913 per week will retain their exempt status if the proposed regulations are implemented. Most salaried employees enjoy some flexibility in their schedules that a guaranteed minimum salary allows. Salaried employees and employers often come to mutually beneficial understandings about work schedules and unforeseen circumstances. For instance, most employers are accepting of a salaried employee’s occasional tardiness or need to leave early, and the employee still receives their full salary because, in general, deductions from salary are not allowed. Furthermore, employees often take pride in their salaried status and will view a conversion to hourly status negatively, perhaps even as a demotion. The one benefit such employees could theoretically achieve—additional income from overtime wages—is unlikely to occur. Employers are often loath to pay overtime wages and prefer to hire part time employees or reassign duties to salaried employees to avoid paying an hourly worker overtime.

The proposed regulations may also be unlawful, as was recently the case with an identical proposal concerning the minimum weekly salary required by the FLSA put forth by the United States Department of Labor (“DOL”) under the Obama Administration. After the DOL proposed to increase the minimum weekly salary to $921 for EAP-exempt employees through notice and comment rulemaking, a diverse group of plaintiffs successfully challenged the law. The court held that increasing the minimum salary to such a high level essentially made the duties tests irrelevant and as a result made the test for the exemption one based only on salary level.

In 2017, a bill was introduced in the Maryland Senate to revise the Maryland Wage and Hour statute by increasing the minimum weekly salary for EAP-exempt employees to $913 per week. When the bill was reviewed by the eleven-member Maryland Senate Finance Committee, it was unanimously given an unfavorable classification and withdrawn by its sponsor. The fiscal policy note that was prepared for the committee noted that businesses that provide the following services would be most affected by the bill: professional and technical services, health care services except for hospitals, and retail trade. It further noted that the proposed law’s largest impact as a share of payroll would be in the food services and drinking places industry. These are precisely the kinds of businesses that will be unwilling to pay a higher salary or overtime wages and instead will seek to hire part time workers. When a change in the law will result in serious consequences to the business climate of a state, it is more properly considered by elected officials and brought about legislatively, rather than by rulemaking.

The DLI Should Adopt FLSA Regulations Concerning the EAP Exemptions Verbatim. The proposed rulemaking suggests that “more closely” aligning the duties tests found in the PMWA’s regulations with similar FLSA regulations will provide “clarity to employees and employers.” I cannot stress how important this goal is to employers. The FLSA duties test regulations have been the subject of extensive litigation and discussion, much of it based on nuances, intensive fact analysis, and reference to other sections of the regulations. Because this body of caselaw represents concrete answers and directives from courts about this difficult area of the law, it would be extremely valuable if it could be applied to duties-test questions and disputes arising under the PMWA. Although the goal of “more closely” aligning the state and federal regulations is laudable, unfortunately the proposed regulations do not go far enough—the language used in the proposed PMWA regulations does not identically track the language used in the FLSA regulations and some important regulations are still missing. These differences also renders court opinions analyzing the FLSA regulations irrelevant because the exemptions are defined differently in the proposed PMWA regulations.

Other obvious differences between the two sets of regulations are not addressed by the proposed regulations. For example, the requirements for the Outside Sales Exemption under the PMWA are different from those of the FLSA. The proposed regulations also fail to address significant gaps in the existing PMWA regulations. For instance, the FLSA’s Computer Professional Exemption, which permits an employer to pay certain computer professional employees a flat rate of $27.63 per hour for all hours worked (i.e., without paying an overtime premium for hours worked in excess of forty in a workweek) is found nowhere in the current or proposed regulations; therefore, Pennsylvania employers who apply this exemption and the employees who enjoy this high minimum hourly rate may not be able to continue to do so. Incorporating the FLSA’s Computer Professional Exemption would ensure that many Pennsylvania employees and employers are able to continue to take advantage of this mutually agreeable pay structure.

Three other exemptions missing from the PMWA regulations are worth mentioning. First, the Highly Compensated Employee exemption found in the FLSA regulations is not available in the current or proposed PMWA regulations. Second, an Administrative Exemption for Educational Establishments, while briefly mentioned in the PMWA itself, is not defined in the PMWA regulations. The FLSA regulations provide a detailed description of this exemption and its requirements. Finally, the PMWA regulations do not provide for a limited exemption from overtime when a healthcare employer and an employee agree to apply the “8/80” rule. Under the FLSA, such employers and employees enjoy a degree of scheduling flexibility by extending the “workweek” to a 14 day period during which all hours over 8 in one day and all hours over 80 in the extended workweek are paid at the overtime rate. Both healthcare employers and their employees would enjoy the benefits of this flexibility if the DLI were to adopt this regulation.

A striking omission from both the existing and proposed PMWA regulations is the lack of any definition of how an employee is paid on “a salary basis.” This is significant because to qualify for the EAP exemptions under the FLSA and the PMWA, both the duties test and the salary basis test must be met. “Salary basis” is defined and extensively explained in the FLSA regulations and is a frequently litigated issue. Payment on a salary basis under the FLSA involves nuanced rules that must be followed exactly or the exemption is lost—regardless of duties performed by the employee—and the employee is owed overtime compensation. By adopting the FLSA regulations on this topic, the DLI would immediately provide certainty for employers that not only have they properly classified employees as exempt because of their duties, but that they are also correctly paying them on a salary basis.

The differences, inconsistencies, and omissions between the FLSA regulations and the PMWA’s existing and proposed regulations addressed above are exactly the type that will generate extensive litigation as attorneys wrestle over their purported impact on an employee’s classification. This will result in increased litigation expenses for employers, which in turn will cause lower profits and potentially job losses or delay salary/wage increases. Furthermore, if the proposed regulations are adopted, the differences that still exist between the FLSA and the PMWA regulations will cast doubt on whether federal court opinions—of which there are many—can be looked to for guidance in interpreting the PMWA. Both employees and employers would benefit from this large body of federal caselaw when evaluating whether current or proposed pay structures are proper under state law, but this will not be possible if differences remain between state and federal regulations.

The best solution is to adopt the FLSA’s regulations verbatim and expressly state that it is the intention of DLI to incorporate the FLSA’s regulations into those of the PMWA so that employers and employees will have the benefit of federal cases interpreting and applying the language that governs both the FLSA and PMWA. The direct reference to, and adoption of, portions of federal regulations by Pennsylvania agencies is not a unique concept. For example, in discussing workplace exposure recordkeeping requirements, Pennsylvania law requires and employer to keep such records “to the extent that it is required by OSHA under 29 C.F.R. § 1910.20(g).” 34 Pa. Code § 315.2.

Furthermore, by fully adopting pay scenarios such as the “8/80” rule and the Highly Compensated Employee Exemption, Pennsylvania employers will not be surprised to find that their good-faith use of a pay policy expressly permitted by the FLSA is, in fact, improper under Pennsylvania law. The current language in the proposed regulations that is similar—but not identical—to language in the FLSA regulations should be revised to incorporate identical language from the FLSA if DLI truly seeks to “align” the two laws.