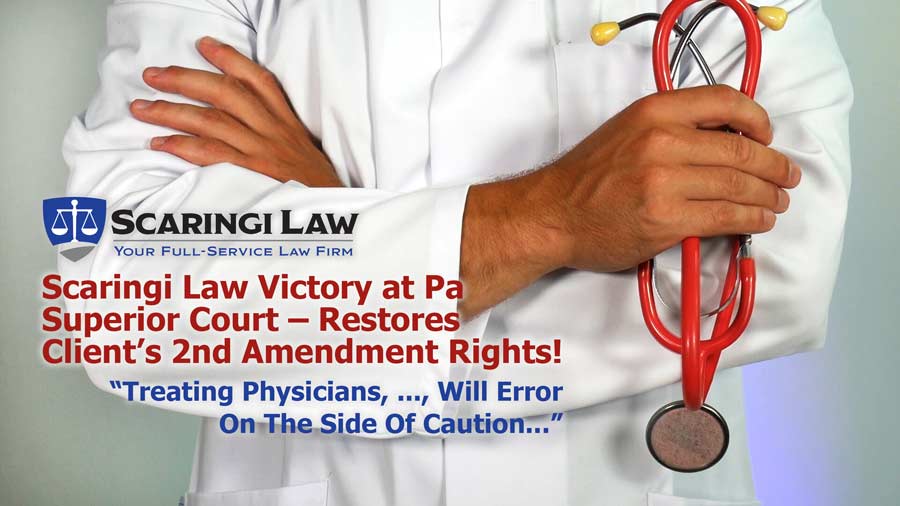 By Marc A. Scaringi

Scaringi Law handles many different types of 2nd Amendment cases. In one area of our practice, we help individuals, who have been subject to a prior involuntary mental health commitment, obtain a restoration of their 2nd Amendment rights. Under Pennsylvania law, an individual who has been subject to an involuntary commitment under Sections 302, 303 or 304 of the Pennsylvania Mental Health Procedures Act (MHPA) is prohibited by law from possessing a firearm. In fact, it is a crime for them to do so pursuant to 18 Pa.C.S. § 6105.

However, there is a section of the Pennsylvania Uniform Firearms Act that permits a person subject to an involuntary commitment under Section 302, to petition the court and challenge the sufficiency of the evidence underlying that commitment. If the person is successful in convincing the court that the evidence upon which the involuntary commitment was based was insufficient, the court shall order that the record of the commitment submitted to the Pennsylvania State Police be expunged. See 18 Pa.C.S. § 6111.1. The result is the person’s 2nd Amendment rights are restored under both state and federal law and he is free to possess firearms once again.

How do these commitments occur in the first place? Through the MHPA, a person who presents as “severely mentally disabled” and in need of immediate in-patient treatment can be taken into custody by a police officer or county mental health officer and transported to a “treatment facility” for an immediate mental health evaluation. The “treatment facility” is usually the nearest hospital with an ER. There the person is supposed to be evaluated by a physician within two hours of arrival. If the physician finds the person suffers from a severe mental disability and that inpatient treatment is necessary, the physician “commits” the person under Section 302 of the MHPA.

Scaringi Law has been successful in challenging some of these 302 commitments and has obtained expungements under the Uniform Firearms Act in courts across Pennsylvania. That’s because not all people subject to an involuntary commitment were actually suffering from a severe mental disability that required inpatient care and not all committed the acts required in order commit them. Many of these instances are isolated episodes, sometimes triggered by the divorce or death of loved one or some other traumatic life experience, and the individual is able to recover his or her mental health quickly or without the need of inpatient care.

Furthermore, often treating physicians, who enjoy statutory immunity for wrongfully committing a person to an inpatient facility, will error on the side of caution and certify the commitment because in their mind it only lasts for up to 5 days and it is better to be safe than sorry. Or, perhaps the certifying physician believes whatever disturbance brought the individual to the hospital will abate within that time period. So, one can see how there are people subject to involuntary commitments who should not have been.

Because a commitment under section 302 of the MHPA affords no due process rights of any kind to the person being committed, there is ample opportunity for these commitments to occur despite the lack of evidence to support them. So, Scaringi Law will examine the commitment paperwork and medical records to determine whether sufficient evidence existed to support the commitment. If we find insufficient evidence, we will challenge the commitment in court and seek to have it expunged. We have been successful in several courts through Central Pennsylvania, including most recently, Centre County.

In the Centre County case, we lost at the trial court level, but won on appeal to the Superior Court, which is rare to do. We won this case because it was clear from the record that our client did not take an act in furtherance of his threat to self-harm, and thus he should not have been committed. The Act permits a commitment if the person within the past 30-days attempts suicide or threatens to commit suicide. If he threatens to commit suicide, he must utter the threat and take a substantial step in furtherance of that threat. In our case, we had a threat uttered, but there was no “substantial step” in furtherance of the threat.

In this case, we were able to have the 2nd Amendment rights of our client restored by effective advocacy in the trial court and appellate court. Congratulations to Scaringi Law Attorneys Brian Caffery and Robert Sakovich for the win.

If you or a loved one was ever subject an involuntary mental health commitment and wish to learn how to restore your 2nd Amendment rights do not hesitate to contact one of the firearms attorneys at Scaringi Law.