If You Want an Enforceable Contract, Put It In Writing! 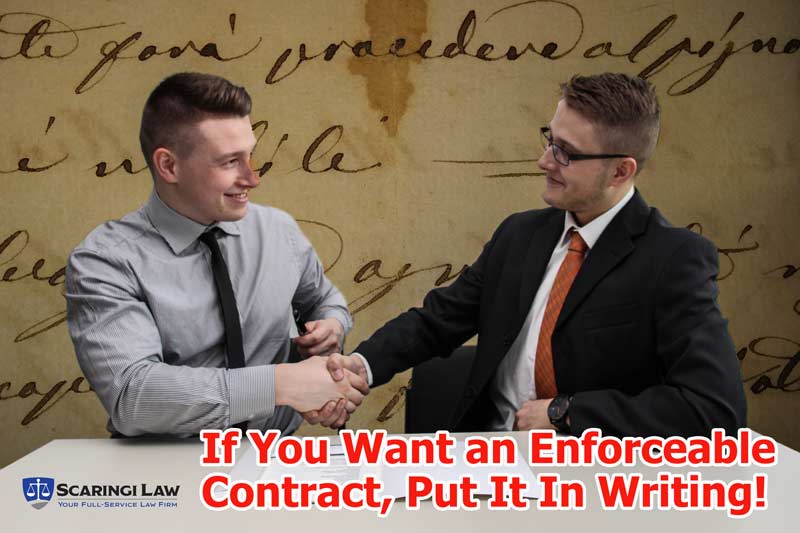 If you intend to make an agreement of importance to your life, your money, or your property, and you want it to be enforceable in case the other party breaks it, you must put it in writing, and have each party sign it. Since I wrote my last article on this point, I’ve encountered yet more people who have failed to put agreements, or even critical terms of agreements, into writing. If you’re negotiating a contract with someone, and he refuses to reduce it to writing, you need to ask yourself whether you should risk your money, property, or independence by doing business with him. Humanity being what it is, your business associate now could become your adversary later. A great man once said, “Trust, but verify.”

People remember things differently. A person’s memory is influenced by his priorities, and two parties to an agreement will have different priorities. Moreover, as the performance of a contract plays out, one party’s priorities might change. In particular, he might decide that it’s no longer in his interests to comply with the contract. If you’re the other party to the contract, that will not be good for you. It puts the relationship off balance. When the other party takes something back, namely part of his obligation under the contract, you lose something, something that has value.

Go into a court with nothing but your recollection and your new adversary’s recollection of an agreement that wasn’t put into writing, and you’ll be at a considerable disadvantage. The judge, jury, or arbitrator will not be impressed, and will have difficulty figuring out who is right.

If you’re considering entering a contract of great importance to your life, your property, your money, or your independence, the best thing you can do is to hire a good lawyer to draft it, review it, negotiate it, and perhaps have it revised. Yes, this will cost you money; but so will entering into the contract to begin with, and perhaps more money than you bargained for should the performance turn south. Even an exchange of e-mails or a signed contract on a cocktail napkin is better than going into a relationship “naked,” with only your recollection and the recollection of the other party.

If you’re contemplating signing a contract of importance, call our office to ask about a free initial consultation.

Brian C. Caffrey, Chair of the Civil and Commercial Section at Scaringi Law, has a great deal of experience in negotiating, litigating, and enforcing contracts.