Employment Problem? Take Steps to Help Your Cause 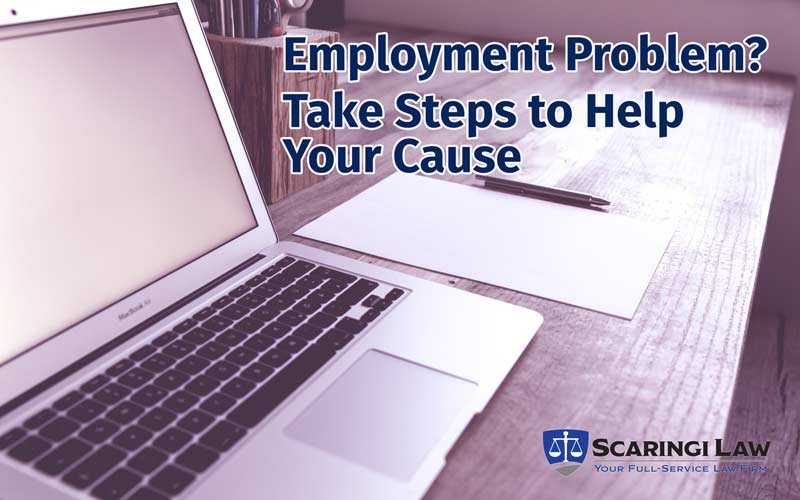 Unfortunately, for a significant number of employees, and for a variety of reasons, relations with the employer, supervisor, or co-worker will sour. The job of an employee in such an environment might, as a consequence, be jeopardized. If you’re that employee, this will be an extraordinarily stressful and unnerving time; but once you’ve realized that you could soon become an ex-employee, you must keep your head, and take some simple steps that might benefit you once you’re clear of the prevailing job crisis.

First, if you’re intending to make complaints to the employer, because of sexual harassment or a problem with your pay, for instance, make sure you communicate your concerns in writing. I often tell people that if it isn’t in writing, it didn’t happen. This is because the memories of those to whom you’ve verbally expressed your complaint often become mysteriously dim once you’re on the outside looking in and they’re on the inside, trying to protect their own jobs. I remain surprised that I even have to say this, but the best way in this world to communicate and memorialize something in writing is to send an email, not a text message. Every employer has email. Emails are quick, they’re in writing, and they’re permanent. They’re also simple to preserve, forward, save, and reproduce. Working with text messages is much more cumbersome, and people tend to feel constrained to communicate very casually in text messages, when their communications in this context must be all business. Do yourself a favor by creating and preserving evidence for a potential future legal claim.

Second, communicate with the right person in the organization. Almost every company of any consequence has an employee manual of some sort. Almost all such manuals will have, among other things, a sexual harassment policy, which will typically tell the employee to whom to report harassing conduct. It might be an HR rep, it might be supervisor or supervisor’s supervisor, it might be the president. State specifically what your concerns are, giving names, places, dates, and names of witnesses. You will be helping your cause should you, in a discrimination case, be required to prove that you reported harassing behavior to the appropriate company official. Consider using your personal email as well as the company email. After you’ve been fired, you’ll no longer have access to your company email account.

Third, keep a journal for yourself, noting who did or said what, to whom, in what place and at what time, and who else was there. This will be invaluable in preparing a discrimination claim or lawsuit.

Fourth, don’t get carried away and start recording discussions with employees or supervisors. Making an audio recording of another person’s oral communications without obtaining that person’s prior consent (preferably in writing) is a felony under Pennsylvania Wiretapping Act.

If you find that your job’s in jeopardy or you’ve already lost your job and think you might have a case of unlawful discrimination, a Whistleblower claim, breach of a formal employment agreement, or even an unemployment compensation claim which has been denied by the Unemployment Compensation Office, call our office, 717 657 7770, to ask about a free consultation.