Bankruptcy and Divorce Go Together Like A Carriage and Horse 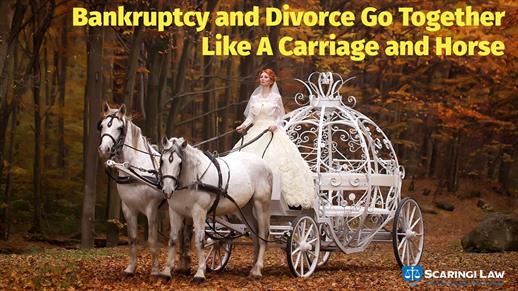 Divorce and bankruptcy often go together for several reasons. First, financial problems are a common cause of relationship problems, so the couple that has had a breakdown financially may also have reached a breakdown in their relationship that makes them want to divorce.

Fourth, divorce is very challenging financially. It is difficult to go from a two-income household to a one-income household and adjust your lifestyle down from the standard of living to which you were previously accustomed to the standard of living you can afford after separation. Usually the parties selected their house based on what they could afford with both of their incomes, and maybe neither of them can afford to maintain that house alone and still stay afloat on other expenses. Court costs and attorney’s fees in divorce add to the financial difficulty. Typically, divorcing parties build up a lot of debt while they are going through the divorce process. They may find themselves needing to file bankruptcy to dig themselves out of the financial trouble they ended up in due to divorce.

What do you file first -- Bankruptcy or divorce?

The timing depends on the circumstances. If you are filing to simplify equitable distribution, discharge joint debts with your spouse, or limit what debts can be assigned to you in your divorce, it makes sense to file bankruptcy before divorce or at least before the divorce is finalized. If you are filing to dig yourself out of the financial mess in which your divorce left you, you want to file bankruptcy after the divorce is completed.

A Chapter 7 bankruptcy is what most people think of when they think of bankruptcy. It is a pretty quick process in which the debtor discharges their dischargeable debts without payment. Any assets that are outside the exemption amounts that can be protected in bankruptcy may be liquidated by the Trustee. Typically, though, you only file Chapter 7 if your assets can definitely all be protected. Chapter 7 also includes some income qualifications. Not everyone can qualify. This is what you want to qualify for and file if you have a lot of credit card or medical debt, and you are current on secured loans you want to keep. It does not provide a way to catch up arrears on secured loans, taxes, and domestic support obligations, though.

Should you file Bankruptcy Jointly or Individually?

Given the relationship issues involved, it probably only makes sense to file bankruptcy jointly if the couple can qualify for a Chapter 7 bankruptcy filing together. A Chapter 13 bankruptcy is a five-year process during which the parties have to make regular payments to a Trustee. That probably requires more time and cooperation with your soon-to-be-ex-spouse than you would ideally like.

Are there any problematic interactions between Divorce and Bankruptcy?

Your bankruptcy and your divorce could have different strategies for valuing assets, and it is important to consider how those strategies impact each other. Both divorce and bankruptcy require you to list all of your assets. Theoretically, there is a true and accurate value that you would honestly list in both places. Realistically, though, there is a range of value that different reasonable experts would attribute to a given asset. In divorce, the parties typically use experts at either end of that range and litigate the value of assets. Typically, one party in divorce wants the value to be higher and the other wants the value to be lower for strategic reasons. Your asset schedules in bankruptcy and your inventory in divorce are filed under oath, so if you file both you should make sure you are consistent between the two of them. If you are inconsistent, you risk penalties for perjury and bankruptcy crimes, as well as your spouse using one of the values you swore to against you.

Additionally, although most adverse actions by creditors are stayed by the automatic stay in bankruptcy, most family law matters are not stayed. You can be pursued for support and custody during your bankruptcy, and your divorce can be finalized. The only family law proceeding that is stayed during bankruptcy is equitable distribution.

What do you do if your spouse or ex-spouse files bankruptcy?

If your spouse’s bankruptcy is adverse to you, you may be able to appear in their bankruptcy case as an interested creditor or as a co-debtor and take certain actions to protect yourself. You also might be able to use information they listed in their bankruptcy against them in your divorce or support case. You should talk to an attorney about what options you have available and what they would recommend.