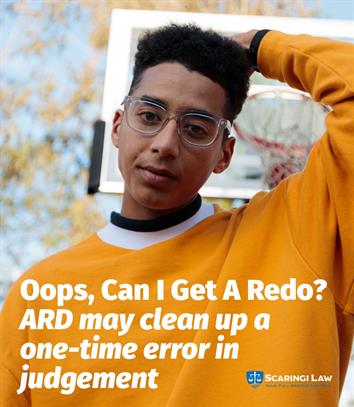 ARD is a great program but it is important that those entering the program understand exactly what the terms of their deal is. In some counties, any time someone enters ARD, every charge at the docket is swallowed up by ARD and eventually dismissed and expunged. In others, though, the district attorney may request that the defendant plead guilty to some of the charges, and only enter ARD on a portion of the case. I recently represented someone who the DA offered ARD for his DUI charge, but requested a plea to reckless driving as part of the deal. While the ARD program would greatly reduce my client’s license suspension on the DUI, the reckless driving guilty plea would call for an additional six months of license suspension. We were able to negotiate with the DA and change the plea to careless driving, which results in points on one’s license in certain circumstances but not an additional suspension.

If you are charged with a crime, contact Scaringi Law 717 657 7770 immediately to ask about a free consultation to find out if you are eligible for ARD and to determine exactly which charges can be included.