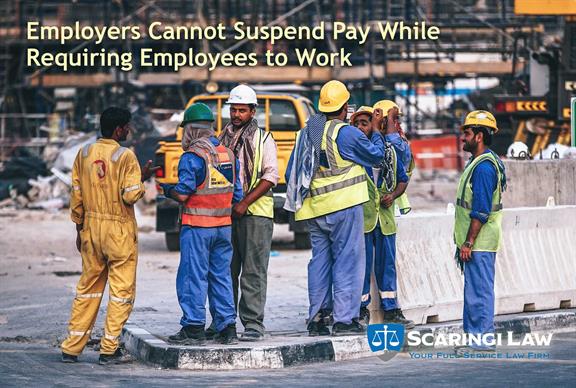 Due to the government shutdown, many federal government employees have been furloughed, i.e., been told not to come to work and not to expect pay. Some critical federal employees, however, have been told to report to work and perform their jobs for no pay. Although the federal government may have laws governing emergencies that it can rely on to require federal employees to come to work without pay, private employers should never think that there is a similar scenario that would apply to their workforce.

There are a series of laws that require employees to be regularly paid for all of the work that they do. First, the Fair Labor Standards Act requires employers to pay employees for all time during which they are “suffered or permitted” to work. This means that employers must understand what counts as work time and what is considered non-compensable time for hourly employees. Travel time between jobsites during the workday, unauthorized work, calling an employee into work on a weekend, even work that an employee was expressly told not to do are all “work” for which the employee must be paid.

Employers who fail to pay an employee all due wages will almost certainly be liable for liquidated damages under the FLSA that double the amount of wages that were not paid. So an employer that may be short on funds for payroll but forces its employees under threat of termination to come to work and work without pay will simply end up owing twice as much in payroll costs. In addition, there may be civil and criminal penalties for knowingly violating the FLSA and an employee who prevails in an FLSA suit is entitled to collect attorneys’ fees.

Although the FLSA provides employees with the right to receive certain wages, many states provide employees with another tool—a wage collection law. In Pennsylvania, the Wage Payment and Collection Law permits employees to bring a claim for unpaid wages and receive damages in the amount of 125% of the unpaid wages. Employers with employees in Maryland should note that a similar law there permits treble damages.

Employers should also be aware that they cannot simply “put off” payday indefinitely if they do not want to pay their employees for some reason. Pennsylvania law requires that hourly employees be paid no less frequently than twice per month. Furthermore, changes to rates in pay or the day on which wages will be paid require that the employer give employees notice of the change at least one full pay period in advance.

A good rule of thumb for employers is to be sure that paychecks are always distributed on the same day on a regular basis and that any work an employee does, even work an employee was told not to do, must be paid for. Remember—unauthorized work is a discipline issue, not a pay issue.

If you have any questions about employee compensation call Scaringi Law at 717 657 7770.