Crimes Under Duress - "Forced to Do It" 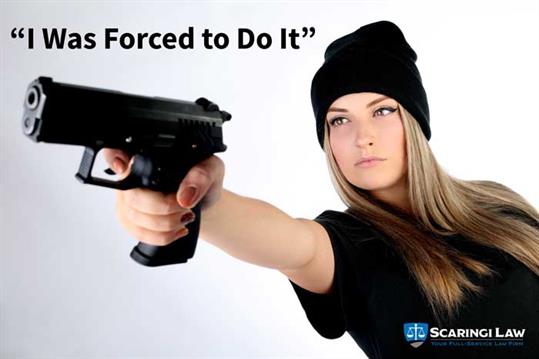 One little known defense for the commission of a crime is that it was committed under duress. In Pennsylvania, if someone is alleged to have committed criminal conduct, “[i]t is a defense that the actor engaged in the conduct charged to constitute an offense because he was coerced to do so by the use of, or a threat to use, unlawful force against his person or the person of another, which a person of reasonable firmness in his situation would have been unable to resist.” 18 Pa.C.S. 309 – Duress.

For example, I previously represented someone charged with robbery as an accomplice for being present along with a gun-wielding acquaintance who held up several folks at gunpoint on the street. The gunman then demanded that my client use the debit card from one of the victims’ wallet at a local ATM so as to not have his own face appear on the ATM camera. My client did not receive any of the money and told police that the gunman threatened him with the gun to use the ATM. Fortunately for him, with this and other evidence, we were able to convince the district attorney’s office that my client acted under duress. The district attorney’s office fortunately withdrew the charges against my client before the case had to go to trial. If someone is forced to commit a crime with a gun to their head, they will be absolved of criminal liability for the crime committed.

As always, there is an exception to the rule. If the actor “recklessly placed himself in a situation in which it was probable that he would be subjected to duress.” The exception also sometimes applies if the actor was negligent in placing himself in such a situation.

If you are charged with a crime, contact Scaringi Law 717 657 7770. Our experienced criminal defense attorneys to find out which defenses may be available to you.