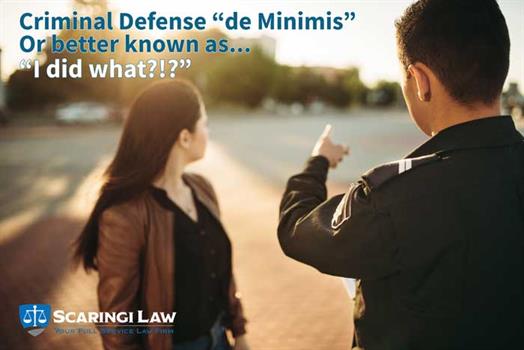 Another little-known defense to the prosecution of an alleged criminal act is to assert that the act in question was “de minimis” (Latin for “about minimal things”). As is apparent from the words themselves, this defense involves an argument that, while some criminal conduct may technically have taken place, it was so minor in nature and inconsequential that it is not prudent or just for a conviction to be sought. Pursuant to the Pennsylvania Rules of Criminal Procedure, the “court shall dismiss a prosecution if, having regard to the nature of the conduct charged to constitute an offense and the nature of the attendant circumstances, it finds that the conduct of the defendant:

In addition to a judge, the district attorney’s office also has the ability to terminate a prosecution on these grounds.

If the Commonwealth is prosecuting you for a minor act, contact Scaringi Law 717 657 7770. Their experienced criminal defense attorneys will discuss your rights.