Does the PA Gaming Board Have Authority Over the Coin-Operated Games of Skill at Your Local Bar or Tavern? 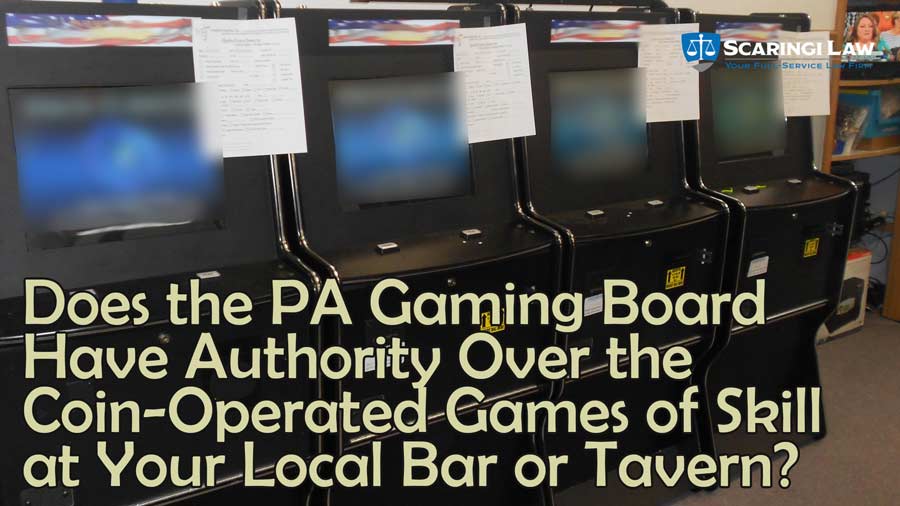 If you govern or manage a Pennsylvania bar, tavern or social club that features or would like to feature certain gaming devices for the entertainment of your patrons, then you need to be aware of this case.

The POM Company manufactures, distributes and operates the Pennsylvania Skill™ Amusement Device (POM Game) throughout Pennsylvania. It was subject to an enforcement action by the Pennsylvania Department of Revenue. In the summer of 2018, Revenue agents in the City of Philadelphia conducted 11 separate seizures of the POM Game at various locations and arrested employees and seized funds at each location. The POM Company sued the Department of Revenue asking the court to stop Revenue from continuing to seize its games, to stop arresting employees of the locations featuring the games, to allow it to continue operating the POM Games and to declare that the POM Game is a legal device under Pennsylvania law.

What is the POM Game? The POM Game is primarily located in taverns, restaurants, and social clubs that serve alcohol under license from the Pennsylvania Liquor Control Board. The POM Game is a coin-operated video machine that offers several games including a Tic-Tac-Toe style puzzle, a potentially unlockable bonus session, and a Follow Me™ colored dot-matching second phase of game play. If a player is ultimately successful playing the POM Game he or she is awarded with a combined total of 105% of the original amount spent to play. The POM Company asserts its POM Game is not an illegal gambling device under Pennsylvania criminal law, but rather, that it is a legal game of skill.

The central question in the case was whether the PA Gaming Act applies to these gaming machines. The Pennsylvania Commonwealth Court, in POM of Pa., LLC v. Commonwealth, 2019 Pa. Commw. LEXIS 1038 (Cmwlth. Nov. 20, 2019), held that it does not. The court reasoned that the Gaming Act was intended to authorize and regulate large-scale slot machine operations involving hundreds or thousands of slot machines, and that the Act was never intended to apply to devices in taverns, and/or social clubs, such as the POM Game.

The court explained that although the Gaming Control Board has general and regulatory authority over slot machines, such authority must be viewed through the lens of the limiting clause in the Act stating that the Board has authority over the “conduct of gaming,” which is defined as the licensed placement and operation of slot machines as authorized and approved by the Board. The court explained that these devices were not licensed by the Gaming Board and as such they do not fall under the Gaming Act.

The Commonwealth Court also held that the Gaming Act did not displace the crimes code that prohibits illegal gambling. And, the Pennsylvania State Police, Bureau of Liquor Control Enforcement continues to have jurisdiction over enforcing illegal gambling at establishments licensed by the Pennsylvania Liquor Control Board. The Commonwealth Court did not render an opinion as to whether the POM Games are illegal; it simply held they do not fall under the jurisdiction of the PA Gaming Act. Please note: It is a Misdemeanor of the first degree to intentionally or knowingly make, assemble, set up, maintain, sell, lend, lease, give away, or offers to do same, any punch board, drawing card, slot machine or any device to be used for gambling purposes. Whether or not a game is an illegal gambling device is a complex question which we will reserve for another time.

A case is currently pending in the Commonwealth Court to decide whether these games are "illegal gambling" pursuant to the Crimes Code.  In November 2019, a manufacturer of the games filed a suit and asked the court to issue a temporary injunction against the seizure of its games from the venues around the state.  The Commonwealth Court initially issued the injunction, but in a ruling handed down last week, lifted the injunction.  This ruling does not decide whether these games can be operated legally.  The court will decide this issue at a later date.

In the meantime, if you govern or manage a Pennsylvania bar, tavern or social club that features or would like to feature certain gaming devices for the entertainment of your patrons, make sure you get it right and are not in violation of the Pennsylvania Crimes Code. Contact Scaringi Law and seek consultation from one of our gaming attorneys at 717-657-7770.