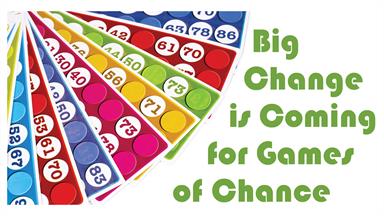 By way of background, section 502(a) of the Local Option Small Games of Chance Act provides that a holder of a small games of chance license must distribute the funds derived therefrom as follows: 60% on public interest purposes and 40% retained by the licensee. Section 505(a) permits a club license to provide funds to a veteran’s organization that conducts activities that include public interest activities.

In the instant case the club licensee and holder of the SGOC license is a home association affiliated with an American Legion Post. The club licensee pursuant to its SGOC license distributed the proceeds from the 60% portion to its parent organization, the American Legion Post. The American Legion Post, in turn, used the proceeds to pay off the mortgage held on the building which housed the club and to fund various capital improvements to the club’s building. BCLE issued a citation to the home association alleging that it was in violation of section 502(a) because the parent veteran’s organization did not use the funds given to it directly on public interest activities.

The ALJ ruled that funds derived from a club liquor licensee’s SGOC license can be distributed to a veteran’s organization without any restrictions on how those funds are used.

To date BCLE has not taken an appeal to the ALJ decision. Should no appeal be filed, then this decision would hold precedence in PLCB ALJ matters statewide.

Club licensees who are interested in the outcome of this decision are cautioned not to act on the information contained herein. All cases are distinguishable by the facts associated with that particular case. You should not act regarding this matter without first seeking legal advice from an attorney experienced with issues involving liquor and small games of chance. If you have any questions or concerns concerning club liquor licenses and small games of chance, please contact me at 717-657-7770.