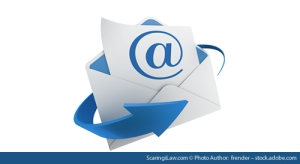 By Brian Caffrey of Scaringi Law posted in Employment Law on Thursday, October 6, 2016.

What makes e-mail misuse so poisonous in a federal job isn't just the many policies and procedures governing workplace usage. It's the fact that troublesome e-mails can stand as permanent, damning proof of employee misconduct.

Because e-mails within the federal system rarely go away, they can haunt an employee months or years down the road. Federal discipline cases regarding e-mails can begin over a particular type of alleged violation. Then, the original investigation stumbles onto offending e-mails, with proof of misconduct that the employee supplied.

The best defense is to be familiar with departmental e-mail policies and then always think before sending.

These actual cases illustrate how e-mails can derail a career:

E-mails are no joke

Emailed jokes that are off-color, racist, sexist or include nudity or pornography can constitute an offense meriting removal from the federal service.

Consider the case of a vocational rehab specialist who had 17 years in at the Veterans Administration in Virginia. All it took was an unthinking decision to forward two off-color e-mails to his wife and daughter to get him terminated.

This case from a Merit Systems Protection Board appeal shows that one of the offending e-mails contained female nudity, and the other, a racial joke. It didn't matter that the e-mails weren't sent to other federal employees.

Worse still, the federal agency's original disciplinary case centered on allegations of ethical lapses, not e-mails. The offending e-mails were found as part of that investigation and became a separate offense.

The worker appealed his dismissal to the MSPB, the federal equivalent of the Pennsylvania State Civil Service Commission, which acts as an adjudicator in disputes between most employees in the competitive service and government agencies. In hearing these appeals, the MSPB is bound to consider a dozen factors in bearing on an appropriate penalty. The severity of the alleged misconduct often carries greater weight than other factors, such as a previously spotless record.

In this case, the government agency alleged that the worker's e-mails amounted to a misuse of public funds and reflected poorly on the agency. These two jokes were enough to end a lengthy federal career. The MSPB upheld the employee's termination on appeal.

Cases of federal employees butting heads with their supervisors can involve one person's word against another's, but when an employee uses federal e-mail to repeatedly challenge, needle and undermine her boss, all those e-mails become key evidence.

In another case from MSPB files, an Environmental Protection Agency attorney believed she could use a series of tartly-worded e-mails to her boss and colleagues to win a grudge match with her supervisor after she was placed on a performance improvement plan.

Instead, the EPA lawyer found herself accused of sending e-mails over a six-month period containing 16 specific instances of disrespectful comments, either to or about her supervisor.

It seems clear from the facts recited by the Board that the employee was attempting to create her own record to proactively defend herself with regard to her performance improvement plan.

But what the employee actually created was damning evidence of her disrespect toward her supervisor, bordering on insubordination.

She accused her supervisor of not carrying out responsibilities, being late for meetings, misrepresenting agency policy and erecting roadblocks to her performance. She also criticized her supervisor and his actions to other employees, for instance, by making reference to his absences for medical reasons. Worse, the wording of the e-mails was harsh, as if written in anger. So instead of proving the supervisor's shortcomings, those permanent electronic messages documented the employee's disrespect and insubordination to the extent that her dismissal was deemed justified by the MSPB on appeal.

Her communications "failed to comport with accepted standards of civil behavior and decorum," the Board's ruling stated. It didn't even matter whether the employee's statements were true. The MSPB never got past the clear evidence of disrespect. In work e-mails, one's tone matters.

Never hit send until you're sure

Never disclose confidential or classified information in the casual use of your work e-mail. Don't share or send agency work product outside the agency.

Restrict your federal e-mail to agency business only. Never e-mail when angry or emotional. And when in doubt, don't send; at least give yourself adequate time to consider your draft e-mail.

Should you face discipline for alleged e-mail misuse or other reasons in the federal workplace, an experienced attorney can use mitigating factors to lessen the severity of the punishment you face.

Brian C. Caffrey focuses his practice at Scaringi Law on employment law, including federal and state civil service protections, as well as civil litigation, contract, business, professional licensure/administrative, personal injury, and appellate law. He can be reached toll-free at 877-LAW-2555 or info@scaringilaw.com