Changes to ARD May Allow Drunk Drivers to Keep Their License 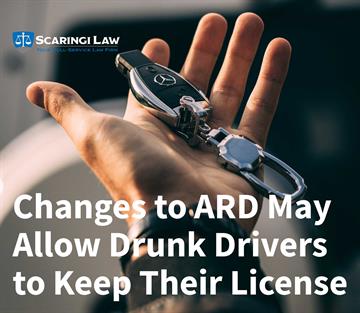 Until recently, the law in Pennsylvania was that, if you receive the Accelerated Rehabilitative Disposition Program (ARD) for a DUI charge, and your BAC was such that you are facing a driver’s license suspension as part of ARD, you had to serve the full term of the suspension – no ifs, ands, or buts about it. A recent change in the law, however, has made it so that you are immediately eligible for an ignition interlock license upon entering the program.

If you are facing a DUI prosecution, contact Scaringi Law’s experienced DUI attorneys, 717 657 7770, to advise you about your potential ability to continue driving legally during a DUI sentence or term of ARD.