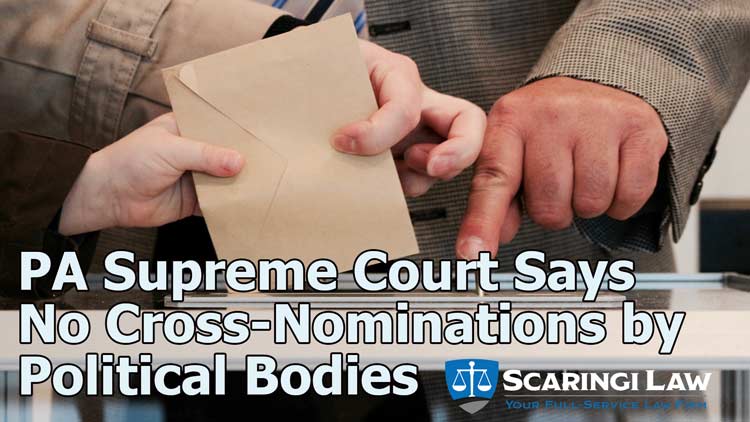 By Marc A. Scaringi

In Working Families Party v. the Commonwealth of Pennsylvania, the Pennsylvania Supreme upheld the Constitutionality of Pennsylvania’s ban on cross-nominations by political bodies a/k/a the “anti-fusion” rule. The anti-fusion rule bans the process by which two or more political organizations place the same candidate on the ballot in a general election for the same office.

Here are the facts. Christopher Rabb ran in the Democratic Party Primary Election for the Pennsylvania state house of representatives. After his Democratic Primary Election win, he filed nomination papers with the Department of State indicating his intention to run in the General Election as a member of the Working Families Party of Pennsylvania. Thus, had his nomination papers been accepted, Mr. Rabb would have been on the General Election ballot under the listing – Christopher Rabb – Democratic Party/Working Families Party.

However, the Department of State denied Mr. Rabb’s candidate’s affidavit for the Workers Families Party because he had already been nominated by the Democratic Party in its Primary election and thus could not thereafter seek the nomination of any “political body” in the General Election. (In Pennsylvania, the Democratic Party is a considered a “political party” and the Workers Families of Pennsylvania is considered a “political body;” as a political body the Workers Families party cannot use the Primary election to nominate candidates, it must do so via petition). In short, the Department of State maintained that Mr. Rabb could only run as a member of the Democratic Party in the General Election and is not permitted to cross-file as a Democrat and as a Working Families candidate.

The Department based its position on the section of the Election Code that prevents cross-nominations or the same candidate representing two different political entities on the same ballot.
A purpose of this law is to prevent political bodies from “party-raiding,” which the court defined as “the organized switching of blocks of voters from one party to another in order to manipulate the outcome of the other party’s primary election.”

Thus, the anti-fusion rule ban stays in effect – if you receive the nomination from a party in a General Election you cannot then run in the General Election both as a member of that party and another political body for the same office.

If you have questions about Election Law or Campaign Finance Law do not hesitate to contact me at 717-657-7770 for a consultation.