The Future of Immoral & Scandalous Trademarks 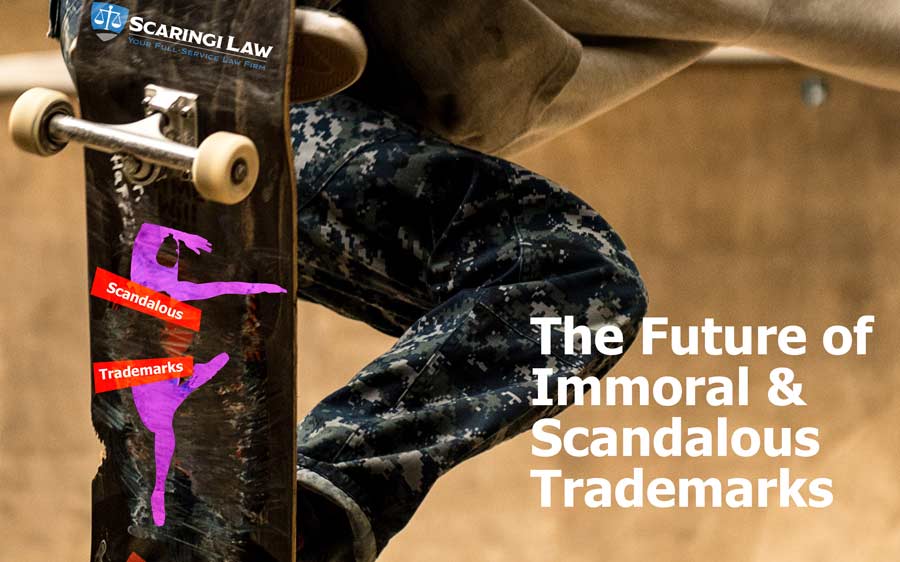 Trademarks are a form of intellectual property that is primarily governed by federal law under the Lanham Act. Like copyrights and patents, the government mainly recognizes a person’s exclusive right to use a trademark to benefit commerce and the consumer public as a whole.

Trademarks benefit the consumer market by allowing consumers to differentiate between products and associate certain goods with the brand and business that the mark represents. Without trademarks, we would have a difficult time distinguishing between goods in commerce.

For example, imagine that soda manufacturers could not use any marks to distinguish their goods from competitors and that all soda was bottled in the same clear plastic bottle. Consumers would have no way of knowing who bottled what.

Now, imagine that soda manufacturers could use marks to distinguish their goods, but the right to use a mark was not exclusive. Coca-Cola could still create a quality soft drink, but nothing would stop another business from bottling a cheaper, inferior quality product using the Coca-Cola mark to ride off of their popularity. Consumers again have no way of knowing who bottled what. Thus, a product without an exclusive trademark has no more value than a product with no mark at all.

As a result, businesses that first use a certain mark to identify and distinguish their products from others have the exclusive right to use that mark to do so. This prevents consumer confusion regarding the source of goods.

Under federal law, the government will only recognize and enforce trademarks that meet certain requirements. First, as a practical matter, a trademark must be “strong” enough for protection. The more arbitrary and fanciful a mark is (e.g., Nike for sportswear), the stronger it is. The more descriptive a mark is (e.g., “Beer” brand beer), the weaker it is. Additionally, federal law prohibits registration of marks that consist of “immoral, deceptive, or scandalous matter.”

According to the First Amendment to the United States Consitution, the government may not pass any law abridging an individual’s freedom of speech. Although many people are familiar with the concept and its importance, freedom of speech is not an absolute right. On a fundamental level, all copyright and trademark laws abridge speech, yet courts do not engage in the wholesale repeal of intellectual property law.

The Supreme Court has interpreted the First Amendment as a protection against improper government interference with the expression of ideas—particularly speech with political content and viewpoints. Courts have held that a law that restricts speech based on its content or viewpoint must be narrowly tailored to further a compelling governmental interest.

So, when is it acceptable for the government to abridge speech and when is it not? The Supreme Court dealt with this issue last month in the case of Iancu v. Brunetti. In that case, the Court was tasked with determining whether the Lanham Act’s prohibition of “immoral, deceptive, or scandalous matter” violated the First Amendment.

In the Brunetti case, Los Angeles fashion brand “Friends U Can’t Trust” tried to register “FUCT” as a trademark. However, the USPTO denied registration of FUCT, citing the Lanham Act’s provisions barring registration of immoral, deceptive, or scandalous trademarks. In a 6-3 decision, the U.S. Supreme Court held that the part of the Lanham Act regarding “immoral” or “scandalous” trademarks required the USPTO to discriminate based on viewpoints and was therefore unconstitutional under the First Amendment. The Court reasoned that the words “immoral” and “scandalous” were vague enough to put the USPTO in a position to discriminate based on what it considered immoral and scandalous.

Will We See More Vulgar Trademarks?

Despite striking down the part of the Lanham Act prohibiting scandalous and immoral trademarks, the U.S. Supreme Court expressed concern that the opinion would open the floodgates to a deluge of trademark registration applications for vulgar trademarks that use or suggest profanity.

The USPTO previously barred registration of FCUK “French Connection United Kingdom”—another fashion brand—and “FUBAR”—a barbecue sauce—based on those provisions in the Lanham Act the Court invalidated last month. It’s reasonable to predict that those companies may reapply for registration of those marks after Brunetti. Washington-based, all-female rock band known as “Thunderpussy”—who was also denied USPTO registration—expressed hope that they can finally register their band’s name for federal trademark protection.

However, the Court said that the U.S. Congress has the power to change the Lanham Act in a way that does not risk the unlawful restriction of protected speech while excluding registration for certain vulgar or offensive words. So, the Supreme Court’s ruling in Brunetti does not necessarily protect against the use of profanity for trademark purposes, but is instead an indictment on the use of the words “immoral” and “scandalous” as a basis for denying trademark protection. Depending on how Congress responds to the Brunetti ruling, we will probably still see this issue come up again in the future.

If you operate a business in Pennsylvania and have concerns about developing a brand for your company, you should consult an attorney from Scaringi Law. We are a full-service law firm with experience in advising and advocating for Pennsylvania businesses on a wide range of issues, including trademark law.

Call our office at (717) 775-7195 or contact us online to ask about a free initial consultation about your case today.