Is the Odor Marijuana Enough to Establish Probable Cause for a Warrantless Search of an Entire Vehicle? 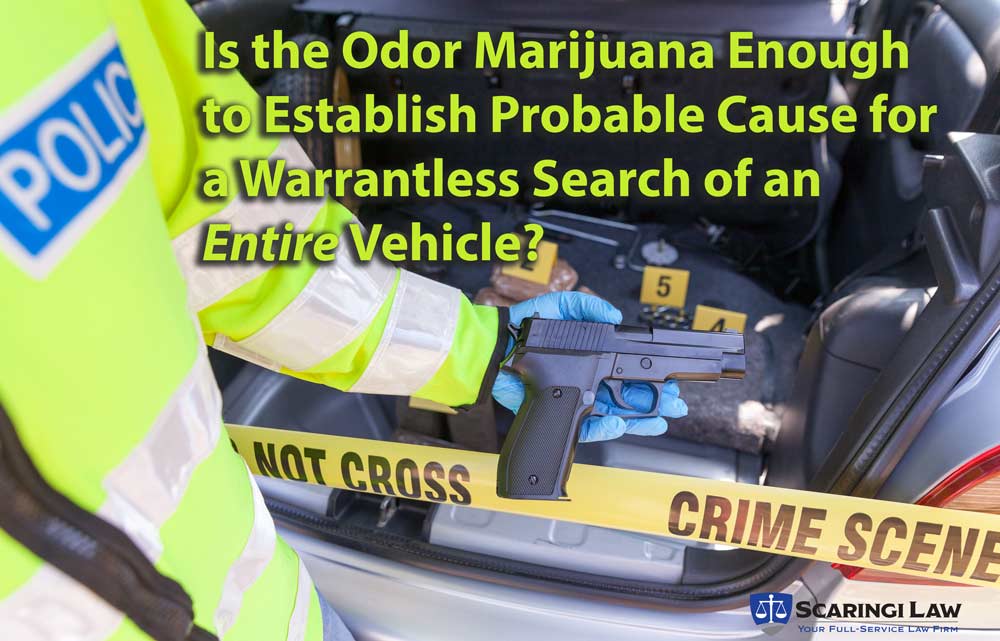 The Pennsylvania Supreme Court has adopted the federal automobile exception to the warrant requirement where the law governing warrantless searches of motor vehicles is coextensive with federal law under the Fourth Amendment. Commonwealth v Gary, 625 Pa. 183, 91 A.3d 102 (Pa. 2014). The prerequisite for a warrantless search of a motor vehicle is probable cause to search; no exigency beyond the inherent mobility of a motor vehicle is required. Id. 91 A.3d at 138.

A determination of probable cause requires only that the totality of the circumstances demonstrates a fair probability that contraband or evidence of a crime will be found in a particular place. Commonwealth v. Manuel, 2018 PA Super 232, 194 A 3d 1076, 1081 (Pa. Super 2018) (quoting Commonwealth v. Otterson, 2008 PA Super 85, 947 A. 2d 1239, 1244 (Pa. Super. 2008). The evidence required to establish probable cause for a warrantless search must be more than a mere suspicion or good faith belief on the part of the police officer.

After the officers found the blunt and the jar of marijuana in the driver side door, they then proceeded to search in the trunk of the vehicle. During the search of the trunk they found a loaded .38 caliber revolver wrapped in clothing.

The driver was subsequently charged with carrying a firearm without a license, carrying a firearm on the public streets of Philadelphia, carrying a loaded weapon, possession of a small amount of marijuana and the summary traffic offense of operating a motor vehicle while consuming controlled substance.

In Scott however, the Superior Court held that the odor of burnt marijuana alone was not a sufficient basis to establish probable cause to search the trunk because the odor of burnt marijuana was consistent with the contraband that was already found in the passenger compartment of the vehicle. Thus, the continuation of the search was based only on the mere suspicion that there was additional contraband in the trunk of the vehicle.

Accordingly, the Superior Court held that the trial court had properly suppressed firearm that was found during the search of the trunk of the car as the continuation of the warrantless search into the trunk of the vehicle was impermissible.

Having knowledgeable legal representation that recognizes these breaks in rules of procedure can be the difference being prosecuted or convicted of charges stemming from a warrantless search. If you need legal representation call Scaringi Law 717 657 7770 to ask about a free consultation.