Payroll and Sales Taxes Can Land You in Jail 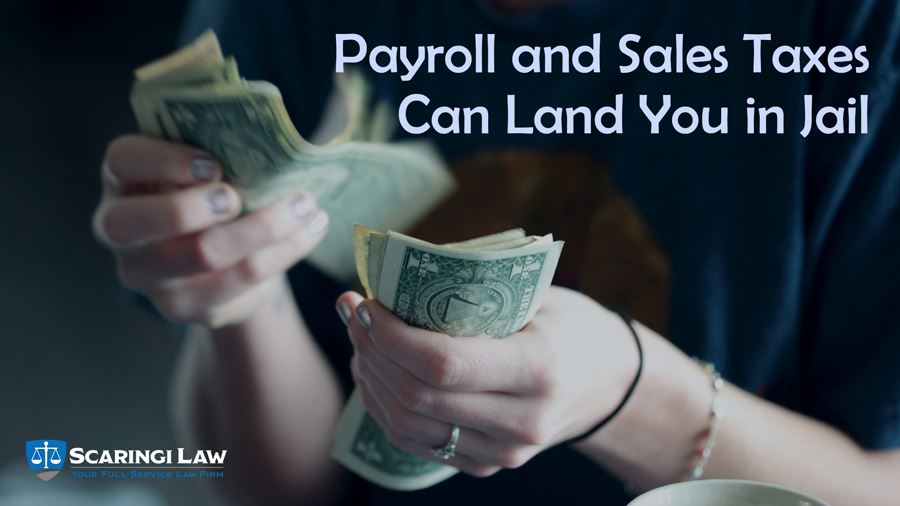 Not paying payroll and sales taxes can bring about criminal as well as civil consequences in Pennsylvania for employers who are supposed to collect but either fail to do so, or who do collect but fail to remit such taxes.

I often wonder who can start and grow a business in such an environment, but such is the reality in the Commonwealth of Pennsylvania and the United States of America today. If you start a business and hire an employee, and agree to pay that employee $10 per hour, you end up paying the employee something less than $10 for every hour worked, while the remainder—actually something above the remainder—is paid over to the federal and the state government. Those taxes include payroll taxes—income taxes, social security (FICA), etc.—as well as unemployment taxes, both federal and state UC taxes, along with the filing of reports of such taxes. There is also, for many businesses, the obligation to collect and pay over state sales taxes. Sure, the customer pays the sales tax that the business is supposed to collect and pay over, but the business person has to create systems and consume time doing so. The business becomes an agent of the government without any compensation for its services.

Take the case of Stuart Matthew Register. Mr. Register was the owner and operator of “Criminal Research Bureau, Inc.” (CRB), a provider of background-check services for other employers. To manage his own payroll, Mr. Register hired a payroll processing company, PrimePay, that prepared employee paychecks and submitted the necessary quarterly reports to the IRS. Although PrimePay was responsible for sending in the payroll reports, Mr. Register was responsible for paying over to the IRS taxes that had been “withheld” from employee paychecks. For several years, CRB withheld and reported federal income taxes and FICA taxes totaling $316,220, but Mr. Register never paid most of the money due to the IRS. Mr. Register also did not file his individual federal income tax returns for several years and used CRB funds to pay his personal expenses directly from the CRB bank account. Later, he filed some of the returns, but generated false W-2s that claimed wages had been paid and taxes withheld when they actually hadn’t. He used the false W-2s to file the returns and claimed false income tax refunds for several of those years. In reality, Mr. Register owed the IRS over $300,000 in tax.

The IRS had him indicted and Mr. Register was eventually sentenced to nearly two years in federal prison. To be guilty under 18 USC Section 7202 of the offense of failing to collect or truthfully account for and pay over the tax, the failure must be “willful”. The element of willfulness, under the federal definition, includes the ability on the day the tax is due to be able to pay, but willfulness also includes whether the person caused his inability to pay on the due date—i.e., his lifestyle throughout the year. The IRS is taking a hard look at the lifestyle of people, by subpoenaing bank statements, who are not paying over their payroll taxes. If you are living a “lavish” lifestyle but are claiming inability to pay the payroll tax, then you may be in some serious hot water with the IRS.

However, willfulness is interpreted differently in the Commonwealth. Under 72 P.S. Section 7353, the crimes statute which is some cases is applied to employer tax cases, a person who willfully fails to collect or truthfully account for and pay over such tax is guilty of a misdemeanor and can be sentenced to pay a fine up to $25,000 and up to 2 years in prison. Willfulness, in Pennsylvania tax cases, uses the criminal definition, according to an unemployment compensation case, Kipps v Commonwealth. In that case, all that the court cared about was whether Ronald Kipps, president and owner of Yale Building Services, Inc., was aware that he was required to pay UC taxes, and that he failed to do so. The court was unconcerned about his ability to pay. In fact, the court said the ability to pay was “irrelevant”. Failing to remit UC taxes can also have additional consequences. Under 43 P.S. Section 872, the UC law, there is a fine of $5,000 and prison of 30 days possible, as well as liens against property under the UC law at 43 P.S. Section 788.1(b).

As you would suspect, a similar result can come about from a failure to collect or remit state sales taxes. Karen Rush operated a Domino’s Pizza store with her husband in Huntingdon County. Ms. Rush did not file and pay over sales taxes of $33,978 for a period of a year, and also failed to report and remit several quarters of payroll taxes of $1,920. Unfortunately for Karen and her husband, they were sentenced to jail and fines. In a different case, Helen Sacco was somewhat more fortunate, after she failed to file her sales tax returns and pay the sales tax while operating her restaurant in Pittsburgh named “Piccolo Piccolo”. She filed the sales tax returns and paid the tax—albeit a year later—and was subsequently charged, convicted, and sentenced to one year of probation and $1,000 fine. But this was overturned on appeal. The court in her appeal said, “[she] did not fail to file the required returns, nor did she refuse to remit the required taxes”. Her only problem was, she filed and paid very late, but the state did not get around to charging for another two years, which was overturned. The important things was—she filed and paid.