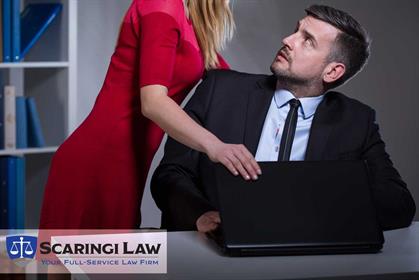 The right to be free from discrimination in the workplace is a “civil right,” on par with other constitutional rights – rights to privacy; property rights; freedom of association rights; religious freedom, etc. Title VII of the Civil Rights act of 1964, as amended, prohibits discrimination against employees and applicants for employment on the basis of race, color, religion, sex (including pregnancy, childbirth, abortion, and related conditions), and national origin. Sexual harassment – though not specifically identified in Title VII – is a form of sex discrimination, based upon the legal theory that the harassment is engaged in “because of” a person’s gender. Females and males are protected by statutes prohibiting discrimination in the workplace “because of” their gender.

There are generally two forms of legally recognized “sexual harassment” – (1) “quid pro quo harassment”; and (2) “hostile work environment” sexual harassment. “Quid pro quo” harassment occurs when an implicit or explicit “threat” or “promise” to grant or deny a job benefit, in exchange for sexual favors, is made a condition of the benefit to the victim, by a supervisory employee with authority over the complaining employee. “Hostile work environment” harassment occurs when sexual harassment is (1) intentional because of the victim’s sex; (2) pervasive and regular; (3) detrimentally affects the victim; (4) would detrimentally affect any other reasonable person in the same situation; and (5) is engaged in by another employee under the employer’s control (referred to as a “respondeat superior” relationship).

When an employee has not suffered a tangible employment action, strict liability does not attach. In this situation, an employer can successfully fend off a claim of sexual harassment not resulting in such employment action by the “affirmative defense” that the employer exercised reasonable care to prevent and correct any sexually harassing behavior; and that the victim failed to take advantage of any preventive or corrective opportunities provided by the employer, or to avoid harm otherwise.

By implementing these preventive and corrective measures, an employer has a much better chance of minimizing the negative impact of, and/or successfully defending against claims of both “quid pro quo,” and “hostile work environment” sexual harassment.

For more information on how employers can protect themselves from sexual harassment claims and create a safe environment for all employees, please do not hesitate to give me a call.