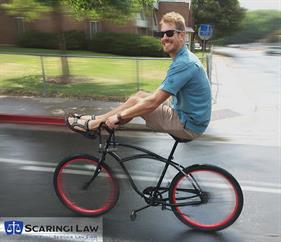 Can a person really be convicted of a DUI in Pennsylvania while riding a bicycle?

The short answer is "yes". It all boils down to the definition of the word "vehicle". Prior to 2004, you could not be convicted for a DUI, while riding a bicycle, because the statute required an operator to be operating a "motor vehicle". A "motor vehicle", at least according to the Vehicle Code, is a completely different animal. It is different because it requires a "motor". But in 2004, the state legislature decided to cast the DUI net even wider so that it catches more people.

In 2004, the DUI statute was changed to remove the word "motor" from the DUI statute and simply leave the word "vehicle". This small change makes all the difference. According to the Vehicle Code, a "vehicle " is defined as any "device, upon which any person or property can be transported". 75 Pa.C.S 102 (Definitions). According to this broad definition of a "vehicle", anything from a skateboard to roller skates can arguably be such a "device". The only exceptions to that definition are "wheelchairs" and "electric mobility" devices. If you don't believe it, read a recent appellate case in which a person was not only charged with a DUI while riding a bicycle, his driver's license was also suspended for 18 months for a refusal of a chemical test. The reason he refused was because he did not believe he could be charged with a DUI while riding a bicycle. He was wrong. Bilka v. DOT, Bureau of Driver Licensing, 92 A.3d 1253 (Pa. Commw. 2014).