Keeping Legal While Purchasing A Firearm 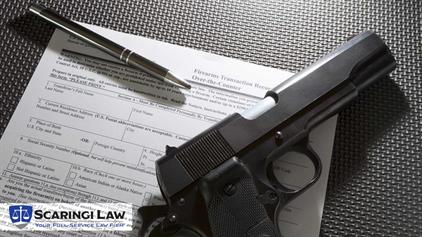 When purchasing a firearm, it is a felony offense to lie on ATF Form 4473. Yet, at any time, our firm represents several honest, law-abiding individuals who are charged with falsifying this form. Clients who, typically, are guilty only of misunderstanding the form.

Particularly concerning is Question 11 and its subparts. Question 11 enquires into the criminal history and other possible federal prohibitions applicable to the person trying to purchase. This question asks every potential gun buyer several complex questions of law that give many lawyers pause.

Question 11c asks: "Have you ever been convicted in any court of a felony, or any other crime for which the judge could have imprisoned you for more than one year, even if you received a shorter sentence including probation?" This question is not easy to answer accurately without some legal research: The prohibition clearly applies to a person convicted of any felony, but also applies, due to an obscure definition in federal law, to any person convicted of a misdemeanor that is punishable by more than two years imprisonment. Moreover, what matters is not the current penalty for the criminal act; if you have a 40-year-old misdemeanor conviction, you need to know what that misdemeanor was punishable by 40 years ago.

Question 11i is similarly complicated: "Have you ever been convicted in any court of a misdemeanor crime of domestic violence?" Sounds easy, but no clear definition of such a crime exists. There are circumstances where it is obvious that a crime should qualify, as where a person is convicted of assault and battery in relation to a significant other. But the courts, in determining whether a crime is a crime of domestic violence for purposes of this question, looks to the elements of the crime and to the facts alleged, leaving many unexplored gray areas: If a son is struck by his father and fights off his father as he retreats, and both are convicted of a crime in relation to the incident, is the son guilty of a crime of domestic violence? Does it matter if they live together? Does it matter if the misdemeanor is for something unrelated to violence, like harassment for texting a former paramour too often? What if the original charge and facts alleged included a crime of domestic violence, but the conviction is simply a summary for disturbing the peace? While there is some guidance from past decisions of our courts, these questions remain tough to answer due to the lack of a specific definition.

Question 11 also asks about unsettled questions of law that nobody in the country knows the right answer to. Question 11e, for example, asks if the applicant is "an unlawful user of, or addicted to, marijuana or any depressant, stimulant, narcotic drug, or any other controlled substance." Would a veteran prescribed medical marijuana within the purview of his or her state's laws be subject to this prohibition? Will that matter if the drug is rescheduled under federal law? The question hasn't been addressed by our courts, so answering "No" as a user of medicinal marijuana may or may not be grounds for falsifying the application. We just don’t have any clear authority at this time.

With questions like these on a form with such high stakes, it is advisable to contact a lawyer if you have any history of criminal activity or drug use, or any other possible prohibition under state or federal law. Scaringi Law, 717 657 7770, can help you figure out whether you are likely to be prohibited or not before you make matters far worse by guessing on Form 4473.