If It's Important, Put It In Writing 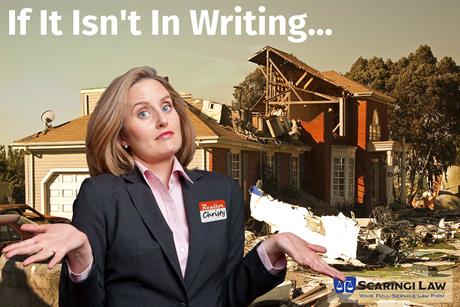 Much of what we lawyers do involves writing: writing e-mails, letters, memoranda, contracts, complaints, briefs, settlement agreements, policies and proposals. For this reason, we're usually surprised when someone makes a significant commitment in his or her business or personal life without committing it to writing. When the deal goes bad, the absence of a writing is usually a problem. One party says one thing was agreed to, another something entirely different. If the dispute becomes intractable, how is a judge, jury or arbitrator to decide who is right? It will come down to one person's word against the word of the other.

Under the law, some promises must be in writing in order to be enforceable. There are “statutes of frauds,” designed to prevent a party from just making something up. The oldest section of Pennsylvania's statute of frauds dates to 1772, and other sections date to 1855. The newest portions of the statute are from 1927.

Pennsylvania's statute of frauds requires that no interest in land, other than a lease not exceeding three years, shall be granted unless by deed or note, in writing and signed by the party granting the interest, or his or her agent. This includes deeds of interests in real estate and grants of mortgages. Trusts in real estate and promises to answer for the debt of another must also be in writing in order to be enforceable.

I often tell people that if it isn't in writing, it didn't happen. If it's important to pin something down, don't rely on verbal assurances and don't just call somebody on the phone. The next time you call a company with which you deal, the person who answers the phone might have no idea what some other, unnamed person promised you previously.

Where significant business or personal transactions are concerned, it is advisable to put everything in writing. And if a transaction you're contemplating has profound, long-lasting consequences, it is advisable to have an experienced attorney draft or at least look over any written contract or proposal. The fee you pay the lawyer could be small indeed compared to the lasting consequences of failing to do so.

If you're asked to sign an important contract or document, call our office, 717 657 7770, to schedule a consultation with one of our experienced attorneys.