Are “Volunteers” Employees Under the Federal Labor Standards Act? 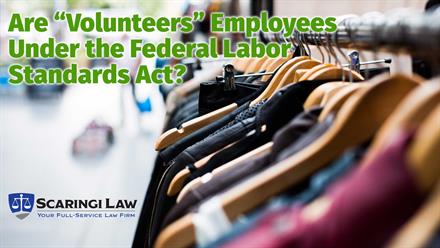 Owners of consignment businesses who use unpaid “volunteers” to help run and operate consignment events should be aware of a recent federal court case declaring these “volunteers” are actually employees of the consignment business and as such are entitled to receive wages, overtime and other protections afforded to employees under federal law. Rhea Lana, Inc. is a national franchisor of children’s clothing and toy consignment events. Its eponymous owner has been featured on national news shows and her franchise business had been lauded for its quick growth and success. An important part of its business model is that it allows consignors (typically moms who wish to sell their children’s used clothing and toys and then purchase new, used items) to serve as “volunteers,” in which they perform key aspects of setting up and operating these consignment event sales in exchange for early access to the sale and thus the opportunity to purchase the most coveted items before the other non-volunteer buyers arrive. These moms do not receive wages and any employee benefits.

However, the U.S. Dept of Labor, which is the federal agency that enforces the Fair Labor Standards Act (FLSA), which has published decades-old agency guidance—in the form of opinion letters—laying out its interpretation of the FLSA as prohibiting private, for-profit companies from using unpaid volunteers, has taken action against Rhea Lana, Inc. The Department of Labor determined these consignor/volunteers were employees and thus entitled to back wages and overtime for their past labor. Rhea Lana, Inc. sued the Dept of Labor seeking declaratory judgment that its consignor/volunteers were volunteers and not employees. In Rhea Lana, Inc. v. United States Dep't of Labor, 271 F. Supp. 3d 284, (September 26, 2017), the U.S. District Court for the District of Columbia agreed with the federal Department of Labor.

Rhea Lana, Inc. appealed that decision to the U.S. Court of Appeals for the District of Columbia. Rhea Lana is trying to hang its hat on a case, Tony & Susan Alamo Foundation v. Secretary of Labor, 471 U.S. 290, involving volunteers working in a non-profit, which is dissimilar from Rhea Lana’s for-profit business. Also. The case cited by Rhea Lana is a U.S. Supreme Court case in which the Court affirmed the finding of the lower court in favor of the federal Dept of Labor and ruled the non-profit and its officers were liable as an enterprise for violations of the minimum wage, overtime, and recordkeeping statutes. In the Alamo case the non-profit’s associates, despite their protestations to the contrary, were found by the Dept of Labor to be employees of the enterprise who were entitled to full protection of the minimum wage, overtime, and recordkeeping requirements because they worked in contemplation of compensation in the form of food, clothing, shelter, and rehabilitation. The case is currently in the briefing stage.