Timing Can Play A Factor In DUI Defense. 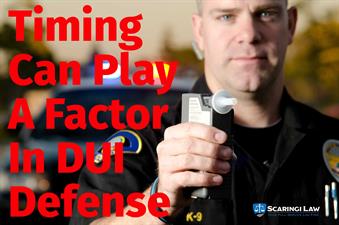 In a Pennsylvania DUI prosecution, police must obtain a blood or breath sample from the accused individual within two hours of the accused driving. In my experience, police are almost always able to obtain the sample in this time period. There is, however, the rare case where they fail to do so. It is more likely to occur in rural areas, where it may take police longer to arrive to the scene of a DUI crash, or to get the individual to a hospital or booking center to obtain the blood sample. There is also an exception to the “two-hour rule.” Pursuant to 75 Pa.C.S. 3802(g), the Commonwealth may still use a blood or breath sample despite having been obtained more than two hours after the accused last drove, where the Commonwealth shows good cause explaining why the chemical test sample could not be obtained within two hours; and where the Commonwealth establishes that the individual did not imbibe any alcohol or utilize a controlled substance between the time the individual was arrested and the time the sample was obtained.

If, for example, police do everything they can to get an accused drunk driver to a hospital for a blood draw but there is a traffic jam that prevents them making it in two hours, they can still use the blood sample as evidence if they can credibly establish that the accused did not drink any more alcohol after having been arrested.

If you are charged with DUI, contact Scaringi Law’s experienced criminal defense attorneys at 717 657 7770 to ask about a free consultation. We have a proven track record of successful DUI defense.