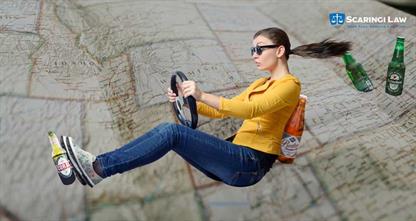 I’ve heard it many times, “I had a DUI outside the state of Pennsylvania a long time ago and it’s no longer on my record. It shouldn’t affect my new DUI case, right?” Unfortunately, the answer to this question is that out-of-state DUI’s may still have a great impact on your DUI case and driving record in Pennsylvania. Even though a previous DUI happened in a different state, Pennsylvania is part of the “Driver’s License Compact;” a national agreement made up of 46 member states, which was organized to improve the enforcement of DUI’s throughout the country. Pennsylvania joined this Compact in or around 1995.

Most importantly for the enforcement of DUI’s, the Driver’s License Compact requires all member states to maintain similar treatment of DUI offenders in their states and to report all traffic offenses of their resident-drivers to neighboring states if requested. This is very important because the penalties for DUI convictions become substantially more severe if you have prior DUI’s on your driving record, which looks back 10 years from the date of the individual’s present DUI charges.

In one example I recently meet, a person who was charged with Driving While Intoxicated (or DWI), in a neighboring state less than 10 years ago. DWI is very similar to Pennsylvania’s DUI Laws, but with a few distinctions. Now facing a DUI charge in Pennsylvania, the client wanted to know what options were available to him.

In general, when facing DUI in Pennsylvania, the best option apart from being found not-guilty at trial, is to enter the “ARD program.” This program allows individuals to earn a dismissal of their DUI charges and avoid a permanent criminal record if they can complete several tasks to accept accountability for their actions and prove to the court that they are no longer a risk to the community. This program is normally available for first-time offenders, but may be granted a second time if the defendant entered a similar program for DUI more than 10 years ago.

In my present case, the client had entered a program similar to ARD in a neighboring state less than 10 years ago, which could have a huge impact on the penalties he faced for his present case. However, there is an exception to this general 10-year rule. If this person’s previous DUI was for a Blood Alcohol Content of less than 0.1 and the prior DUI was his very first DUI, ever, he may be eligible to receive ARD a second time within 10 years for the present DUI. Using this defense it may be possible to enter the ARD Program a second time and lessen the impact of a DUI conviction with the cooperation of the District Attorney’s Office. Still, the safest bet is not to drink and drive in the first place. Drivers facing DUI cannot afford the stiff penalties that come from this serious mistake.

If you are facing DUI charges and need representation call Scaringi Law 717 657 7770 to ask about a free consultation.