Hold onto Your Gun Rights By Obeying The Law 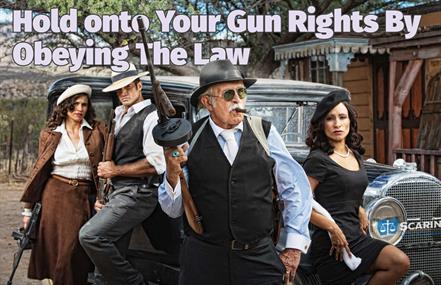 The authors of the Declaration of Independence held it to be self-evident that we are endowed by our Creator with certain unalienable rights, and that among these are life, liberty, and the pursuit of happiness. The Bill of Rights enshrines the right to bear arms second only to the First Amendment, which guarantees the freedoms of speech, the press, assembly, religion, and to petition the Government for redress of grievances. However, the Second Amendment right to bear arms is no more unrestricted than is the hallowed First Amendment. After all, one cannot, as the Supreme Court said many years ago, shout "fire" in a crowded theater; nor is one free to defame (e.g., by speaking) another without consequence.

The Supreme Court, after having decided that there is an individual Constitutional right to keep and bear arms, at least in the home, has left it to federal courts of appeal to develop the parameters of this right. The federal Gun Control Act disqualifies anyone who has been convicted of a crime punishable by a maximum term of imprisonment of more than two years, regardless of the sentence actually imposed (probation, for instance). While there’s agreement in the Supreme Court and the federal appeals courts that those convicted of undeniably “serious crimes”— like murder, rape, robbery, burglary, and kidnapping—do not have the right to bear arms, nonetheless, many offenses falling within the federal prohibition are not included in this list of undeniably serious crimes. A second offense DUI in which no one was hurt and no property damaged, for example, could result in a lifetime prohibition on possession anything from a handgun for personal defense or target shooting to a hunting rifle. And it doesn’t matter how long ago the conviction was, how old you were at the time, or how sterling a life you’ve lived since then. The legislature has drawn bright lines here.

In this age in which we seem to hear of another mass shooting every week, people, their legislators, and the courts are paying close attention to these events and are affected by them. If you have a criminal record that is disqualifying, and you seek to have your rights restored through federal litigation, the Attorney General and the court will take a long, hard look at your conviction. For these reasons, the best way to retain your Constitutional right to bear arms (which extends at least to your home) is to respect and obey the laws, or in the phraseology of some commentators and federal appeals court judges, to behave as a “virtuous citizen” would. The fact is that generally speaking, the government and the courts will expect those who use firearms to obey the law.

Lawyers at Scaringi Law are experienced in evaluating and litigating claims for the restoration of firearms rights. If you’re under a disqualification because of the Federal Gun Control Act or PA’s version of the Uniform Firearms Act, call our office 717 657 7770 to ask about a free consultation.