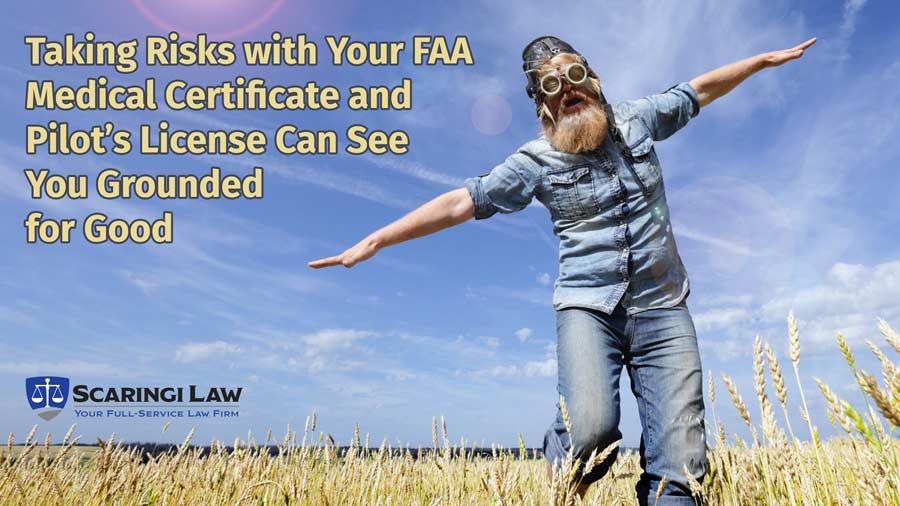 Don't DUI while you fly.

Federal aviation regulations prohibit a person from performing a safety-sensitive function "while that person has a prohibited drug, [such as marijuana, cocaine. . . and amphetamines] in his or her system”. 14 C.F.R. § 135.249(b). Such drugs also include "cocaine metabolites." The regulations permit the FAA to revoke a pilot's airman certificate if he flew an aircraft with such substances in his system, and to revoke a pilot's medical certificate (needed to show he is physically able to fly a plane) based solely on a failed drug test. This is what happened to Charles Gabbard in 2007.

In 2007, the FAA revoked Charles Gabbard's airman and medical certificates after he failed a drug test and after the FAA concluded that he piloted a chartered jet with a prohibited drug in his system. On February 16, 2007, at 1:05 p.m., Gabbard, a commercial pilot with a 1st Class Medical Certificate, was randomly drug tested under his employer's FAA-mandated drug-testing policy. The next day, at 1:10 p.m., he flew a chartered jet. Then, on February 21, 2007, the drug test results came back: Positive for cocaine metabolites.

In April 2007, based on Gabbard's positive drug test and its conclusion that Gabbard had piloted the February 17 flight "while having a prohibited drug, cocaine, in [his] system," the FAA issued an emergency order revoking Gabbard's pilot’s license and medical certificate. After an evidentiary hearing, the Administrative Law Judge affirmed the FAA's decision. The National Transportation Safety Board (NTSB) also affirmed. He then appealed to the United States Court of Appeals for the Sixth Circuit. Gabbard v. FAA, 532 F.3d 563(6th Cir. 2008).

In his appeal to the Sixth Circuit, Gabbard argued that the FAA did not adequately show that he had cocaine metabolites in his system when he piloted the flight. The court, however, found that substantial evidence supported the FAA's conclusion. An adverse credibility finding undermined Gabbard’s explanation of when and why he consumed cocaine, and the uncontested evidence showed that Gabbard piloted a chartered jet 42 to 44 hours after smoking crack cocaine—within the 24 to 48 hour window that it normally took for cocaine metabolites to leave a person's system--and that Gabbard still had a substantial amount of cocaine metabolites in his system 24 hours before the flight when he took the drug test. Unfortunately for Gabbard and others, inadvertent ingestion of a prohibited drug is not excusable under FAA regulations. The FAA was not required to present expert testimony on the rate at which crack cocaine metabolized within a person's body. Also, Gabbard tried to argue that he smoked an ordinary cigarette that he did not know was laced with cocaine until after a couple puffs, but this was not a legitimate medical explanation for purposes of 49 C.F.R. § 40.151(d). Gabbard try to blame his lawyer—arguing he was denied effective assistance of counsel at his hearing, but the court noted that there was no constitutional right to counsel in a civil case.

Even if inadvertent ingestion constituted a legitimate medical explanation, he still would come up short because the ALJ and the Board had ample bases for "find[ing] [Gabbard] not . . . credible," and thus for rejecting his explanation on that ground. Unlike a pilot who unknowingly ingests a drug and learns after flying a plane what he had consumed, Gabbard knew, according to his story, that he had ingested cocaine immediately after he took a couple puffs from the cocaine-laced cigarette. Yet he chose not to report that fact to his employer, and, making matters worse, he flew a chartered jet less than two days later and subsequently suggested to the medical review officer that the cocaine may have come from plastic surgery or from being around others who were smoking cocaine.

The FAA presented the following evidence to the ALJ: Gabbard admittedly smoked crack cocaine sometime between 5:00 p.m. and 7:00 p.m. on February 15. Gabbard's urine sample, taken at 1:05 p.m. the next day, on February 16, showed that his cocaine-metabolite level was 2,054 nanograms per milliliter, nearly seven times the regulatory limit of 300 nanograms per milliliter and over thirteen times the confirmation threshold of 150 nanograms per milliliter. See 49 C.F.R. § 40.87. Gabbard flew a chartered jet at 1:10 p.m. on February 17. And, according to the report of the third party that tested Gabbard, the "main urinary [cocaine] metabolite . . . is normally cleared from the urine in 24-48 hours." On top of this, the ALJ reasonably found Gabbard not credible, raising questions about how and when Gabbard ingested the cocaine. Based on this evidence and finding, the NTSB "agree[d] . . . that it was more likely than not that cocaine metabolites were present in [his] system, in violation of §135.249(b)."

In view of this evidence, "a reasonable mind" could find that Gabbard piloted a chartered jet with cocaine metabolites in his system. In particular, the uncontested evidence that remained showed that Gabbard piloted a chartered jet (at most) 42 to 44 hours after smoking crack cocaine--within the 24-to-48-hour window that it "normally" takes for cocaine metabolites to leave a person's system--and that Gabbard still had a substantial amount of cocaine metabolites in his system 24 hours before the flight. Gabbard made a poor decision, took unnecessary risks by ingesting a prohibited substance which was not metabolized from his system, and lost his privileges to fly, not to mention damaging a career for which he had trained for long and hard.

If you need legal representation for your Aviation License, contact Scaringi Law at 717 657 7770 for a consultation.