Can a Sheriff Perform a Traffic Stop Over an Expired Tag? 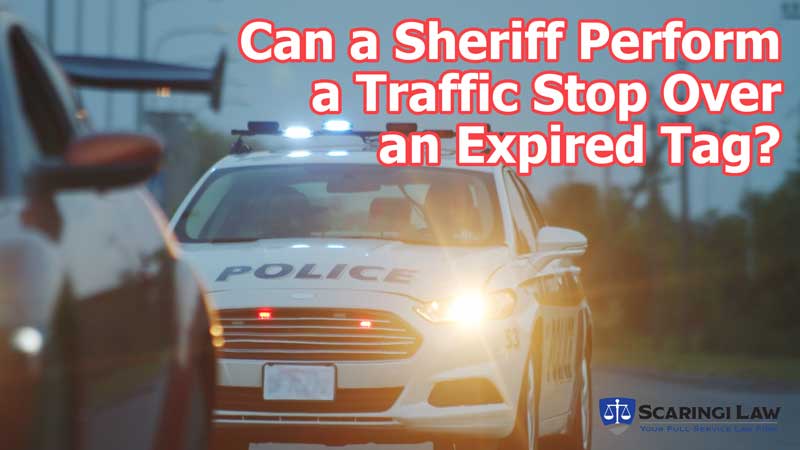 Police officers may initiate a traffic stop when they have probable cause that a violation of the Vehicle Code has occurred. But what about Sheriffs? Do they have that same power?

Although sheriffs and their deputies are not police officers under the Vehicle Code, the Supreme Court of Pennsylvania tells us that the common law powers of the sheriff include the power to enforce the Pennsylvania Motor Vehicle Code. More particularly, the Supreme Court has stated that a sheriff (and his deputies) may make arrests for motor vehicle violations which amount to breaches of the peace committed in their presence, where the sheriff or deputy has completed the same type of training that is required of police officers throughout the Commonwealth.

What is a breach of the peace? For purposes of a deputy sheriff's common law authority to enforce the Vehicle Code, a breach of the peace arises from an act or circumstance that causes harm to persons or property, or has a reasonable potential to cause such harm, or otherwise to provoke violence, danger, or disruption to public order. Now let’s look at the facts of a recent case to help us answer the question – does the Sheriff have the power to perform a traffic stop for an expired registration tag?

On August 31, 2015 Deputy Sheriff Timothy Beall of Adams County performed a traffic stop of the defendant’s car. The basis of the stop was for an expired registration sticker. The stop resulted in the deputy observing an odor of alcohol and marijuana, the defendant had bloodshot eyes and slurred speech. The deputy performed field sobriety tests that the defendant failed, and the defendant was arrested for DUI and placed into custody. But, did the sheriff have the power to stop the driver in the first place?

In the DUI case that resulted from this stop, the sheriff admitted that he stopped the vehicle because he noticed the registration sticker had expired; he also noticed, although it was not clear when, that the registration sticker belonged to another vehicle. The prosecutor argued that the sheriff was concerned that the vehicle may have been stolen, and that vehicle theft is a “breach of the peace,” thus permitting the sheriff to make the stop. What do you think? Is vehicle theft a breach of the peace?

The Adams County trial court judge agreed with the sheriff and prosecutor reasoning that because the deputy observed the defendant operating the truck with an expired registration tag, which also belonged to a different vehicle, the truck could have been stolen, which would "certainly [be] a breach of the peace." The defendant was then convicted of DUI and appealed. The PA Superior Court, which is the intermediate level appellate court, agreed with the trial court judge. The PA Superior Court held that the defendant’s action in driving the pickup truck with an expired registration tag involved a breach of the peace, thus authorizing the deputy to conduct the traffic stop. The defendant appealed again; this time to the PA Supreme Court.

On remand, the PA Superior Court indicated that the facts show the sheriff did not become aware that the vehicle bore another vehicle’s registration sticker until after he had stopped the vehicle. Thus, the PA Superior Court held that because the expired registration sticker did not amount to a breach of the peace, as has now been declared by the PA Supreme Court, and that there is no record evidence of a breach of the peace prior to Deputy Beall initiating the traffic stop, the stop was illegal.

The significant holding in this case was this: although an expired inspection sticker does authorize a police officer to make a traffic stop, it does not authorize a Sheriff, because it does not constitute a breach of the peace.

If you are charged with a Motor Vehicle Code Violation, including DUI, call Scaringi Law at 717 657 7770 to ask about a free consultation.