Are Cryptocurrencies the Future of Investment Funds? 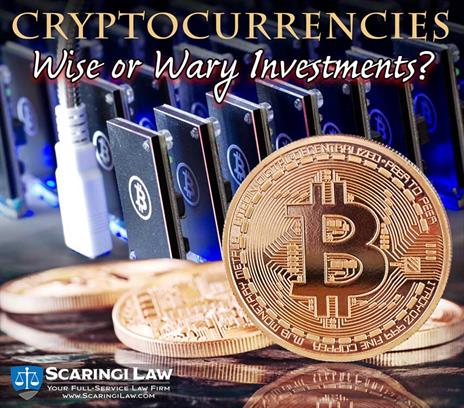 Recently, I have had multiple meetings with groups interested in forming an investment mutual funds and advisor firms focused primarily on cryptocurrencies. The most notable was two men preparing to form an investment fund focused exclusively on Bitcoin.

As an attorney with extensive international investment and finance background, I know this would skirt the farthest edge of the growth-type funds. After discussing the potential benefits, and challenges ahead of the, I suggested they not plan to sell to folks living on social security and pensions and accordingly agreed, if they retain our firm, to draft all the necessary offering and registration documents necessary for them to create and begin to operate their cutting-edge fund.

Almost giddy with excitement, I felt it important to ground them a bit by relating how dangerous it is to put all their eggs in one basket.

Bitcoin, for example, was trading at $953 per coin on March 25, and on August 25 was trading at $4,300 per coin. This is an astronomical increase, in just six months, of 351 percent, or 843 percent on an annualized basis. Bitcoin itself can be purchased on regulated exchanges such as Global Digital Asset Exchange (GDAX), (which claims to be insured by the FDIC.) As I listened to their fervor, I was drawn back to one of the most famous examples of market bubble explosions, the tulip bulb craze.

It occurred in Holland during the early 1600s, when speculation drove the value of tulip bulbs to unrealistic extremes. At the apex of the market, the rarest tulip bulbs traded for as much as six times the average person's annual salary. Forward-thinking people decided to sell early and guarantee their profits. But this caused a domino effect of progressively lower and lower prices, causing people to panic and sell regardless of losses. The government attempted to halt the crash by offering to honor contracts at 10 percent of their face value. But the result was an even lower market plunge. No one emerged unscathed from the crash. Even the forward-thinking people, who had locked in their profit by getting out early, suffered under the economic depression that followed.

And, of course, there was the epic “tech wreck” bubble collapse, which followed on the heels of the Y2K hysteria. After more than five years of steady market growth, the dot com bubble peaked on March 10, 2000. This marked the collapse of many startup internet companies, along with several interest rate increases by the Federal Reserve. It led to an economic recession precipitated by a rapid, nearly unimaginable decline in the Nasdaq.

As I painted a picture of balance, and cautious diversity, these two aggressive fund developers saw the merit in expanding the investment scope outside of solely cryptocurrencies. I recommended they include stable bonds and money market funds, in the event the significant risks this devil’s advocate envisioned actually came to fruition, at least they would have something left to pay back shareholders who had showed up at their door with torches and pitchforks.

While it is not my place to decide whether, and what kind of business, to enter, when setting up and properly operating a business, I always strive to provide my clients with solid legal guidance based on my decades of investment-investigation wisdom. My experience and expertise in the area of finance, investing, tax, and investment regulation is exactly what an entrepreneurial venture such as this one will benefit from.

What exactly is a cryptocurrency? The most well-known cryptocurrency is Bitcoin. It is a digital currency not regulated by an organization or country. In a traditional online cash or currency based system, commerce relies almost exclusively on financial institutions, such as banks, serving as trusted third parties to process payments. While such a system works well enough for most transactions, there are inherent weaknesses in this trust-based model. Completely non-reversible transactions are not possible, since financial institutions must mediate disputes. The costs of mediating disputes increase transactions costs, and burdens the system from being practical for small casual transactions. The possibility of reversal, demands the need for trust spread. Merchants have no choice but to be wary of their customers, often “hassling” the innocent for information. A percentage of loss, as fraud, is unavoidable, acceptable, and factored into the cost of doing business. In person, non-electronic transactions lessen these uncertainties, but such transactions hinder the ability to do business on a national or international level.

A cryptocurrency is represented by a virtual coin, which has a specific, but fluctuating value, much like a gold Krugerrand’s cost is dictated by the value of gold on any given trading day.

But that’s where the similarity ends. Cryptocurrencies exist as a simple, but nearly-bulletproof, chain of digital “ownership” signatures.

In a transaction, the owner of a “coin” transfers it to the next owner by adding a digital signature to the end of the coin’s chain. The recipient can verify the signatures, and thus be certain of the coin’s validity and know the progression of ownership is legitimate. (This is a very spartan illustration.)

The intrinsic difference between a cryptocurrency like Bitcoin, and a traditional bank transfer is Bitcoin has no “middleman”. There is no financial institution brokering the transaction. It is pure peer-to-peer “electronic cash”, that allows online payments to be sent directly from one party to another, without going through a transactional, third-party “processor”.

Cryptocurrencies’ digital “signatures” provide a near-perfect solution, to the traditional pitfalls of requiring a trusted “third party” to prevent “double spending”, or counterfeiting.

Imagine you pay for goods or services with a document that required your unique, unalterable, signature. That document could be passed from buyer to seller only by the parties adding their one-of-a-kind signatures to the end of the list. The transaction occurs, only, between the two parties, and the chain includes a permanent, encrypted record of all previous transactions. As the chain gets longer, the strength of the document increases. Making any kind of change or alteration would require a total rework of all past transactions. An effort that is far too time-consuming to be profitable for would-be hackers, counterfeiters, etc.

But, as the adage says, history will always repeat itself. Cryptocurrencies, while being a powerful evolution towards economy-independent finance, simply cannot be 100% bulletproof. Or can it? As the stakes increase, the willingness and extent wrongdoers are willing to go to, increases exponentially as well. Right now, the technology of cryptocurrencies is outpacing those who would thwart it. But only time will tell.