DUI Check Points – Are They Constitutional? 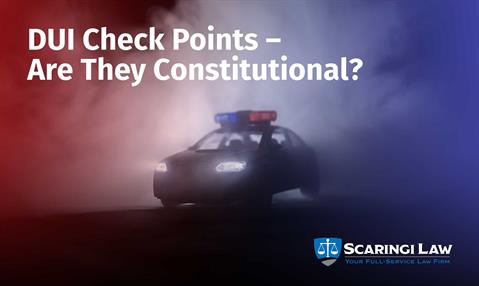 With Holiday Parties and New Year’s Eve approaching, it is highly likely that the Pennsylvania State Police as well as other local police departments are going to start protecting the public from intoxicated drivers by having DUI checkpoints setup throughout Pennsylvania.

I have had many people ask me about the constitutionality of DUI roadblock checkpoints. “How are they allowed to stop every single person? Don’t they need probable cause?” The short answer, at least in Pennsylvania, is “no.” DUI checkpoints do certainly seem to run counter to the constitutional protections afforded to citizens by the Fourth Amendment to the United States Constitution and Article I, Section 8 of the Pennsylvania Constitution. The Pennsylvania Supreme Court, however, held in Commonwealth v. Tarbert and Commonwealth v. Blouse, that while DUI roadblocks do intrude on individual constitutional rights, the intrusion is permissible because it is outweighed by the state’s interest in protecting people by enforcing DUI laws to this degree. These two cases also established the guidelines under which checkpoints must operate, which are as follows:

Law enforcement failure to follow these guidelines can serve as the basis upon which to fight a DUI charge. If you have been charged with a DUI as a result of driving into a DUI roadblock checkpoint, contact Scaringi Law 717 657 7770. We will review the specifics of the checkpoint and determine if we can fight your charge on this basis.