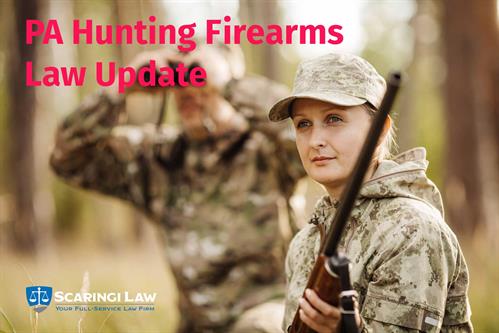 There are new firearms rules for the 2018-2019 Pennsylvania hunting season, and we’re here to make sure you understand them.  The following is an overview of the firearms regulations in place for this season.

Under Pennsylvania law, it is prohibited to:

Those with a License to Carry Firearms permit are exempt, but remember that many sporting firearms are not authorized under that permit.

It is safe practice to discharge a loaded muzzleloader or crossbow into soft ground before loading them for vehicle transport.

Shotguns used for hunting small game, furbearers, turkeys, waterfowl or crows are limited to a 3-shell capacity in the chamber and magazine combined.  A plug must be a one-piece filler installed such that removing it without disassembling the gun or magazine isn’t readily possible.

There are no magazine capacity restrictions for semiautomatic rifles used for hunting small game and furbearers.

The law prohibits hunting with automatic firearms.  Semiautomatic rifles, air- or gas-powered rifles, and manually operated handguns may be used to hunt small game and furbearers.

However, it is legal to hunt deer, bear, and elk with semiautomatic centerfire shotguns that fire single-projectile ammo.

Have Questions? Speak with an Experienced Firearms Attorney

It is important to remain updated on any changes in hunting and firearms laws.  The lawyers at Scaringi Law can provide proactive and comprehensive legal guidance on firearms law to ensure your firearms rights are protected.

Please contact Scaringi Law, or call us at (717) 775-7195 to consult with an experienced hunting and firearms lawyer.