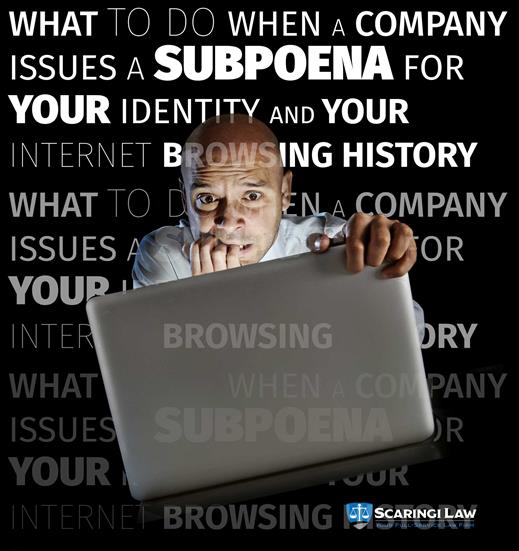 Companies that sell copyrighted works like music files, videos, and movies online have been cracking down on the illegal downloading and sharing of these files using Torrent software. One such company that is particularly aggressive is Strike 3 Holdings LLC (“Strike 3”). Strike 3 produces, promotes, and sells pornographic videos under various brand names. The company rents and sells DVDs and videos through the mail, video stores, and cable outlets. The company also has a website where subscribers can view and download videos for a monthly fee. During the past five months, Strike 3 has been aggressively pursuing people in Pennsylvania who downloaded its videos using Torrent software and then shared those videos with other Torrent users.

The first sign of trouble is usually a letter from the company that provides your home internet service, such as Comcast or Verizon. This letter generally states that the internet service provider received a subpoena from a federal district court requesting your identity because Strike 3 has evidence that your personal internet account, or IP Address, has been associated with the illegal downloading and sharing of Strike 3's pornographic videos using Torrent sites. If your cable provider responds to the subpoena, Strike 3 will have access to your name, address, every website you have visited, and any files you have downloaded or uploaded. You have a limited time to oppose the subpoena in federal court and failing to respond by ignoring the problem will result in this information being revealed to Strike 3. Strike 3 will then file updated paperwork, which is accessible by the public, with the court identifying your name and address accusing you of downloading pornographic videos, the time and date the videos were allegedly downloaded, and the specific titles of the videos. The case will then proceed as a Copyright Infringement case in federal court.

A Maryland court has recently observed that Strike 3 engages in "abusive settlement negotiations" with people who receive a subpoena concerning the downloading and sharing of videos that belong to Strike 3. If you receive such a subpoena, you should immediately seek legal advice so an attorney can evaluate your case and help you defend against Strike 3's allegations or help you negotiate a fair and reasonable settlement that does not involve threats of exposure or embarrassment.

If you have a wireless internet router that provides wireless internet access within your home and you did not engage in Torrent file downloading and sharing, it is possible that a next-door neighbor or stranger parked outside of your home accessed the internet using your wireless signal and engaged in illegal video downloading. In other cases, a visitor in your home or a friend visiting one of your children could be responsible. No matter the situation, you can assert a defense or try to negotiate a reasonable settlement if you have experienced counsel who know how to investigate these claims thoroughly.

Violations of the Copyright Act, such as illegally downloading and sharing copyrighted videos, can result in significant fines, some of which have no relation to the amount of harm actually suffered by the producer or owner of the video. This means that Strike 3 does not need to prove any actual damages at trial. These fines can range from $750 to $30,000 per video. Strike 3 generally only files a complaint and issues a subpoena for your IP Address information if the company believes you have illegally downloaded at least 20 of its videos.

Don't be bullied. Don't admit wrongdoing if you haven't done anything wrong. Don't settle for an unreasonable amount. Don't let your personal information be revealed in court documents available to the public, your family, or your employer. Contact Scaringi Law, 717 657 7770, to talk with an attorney who understands your situation and can help you respond to a Strike 3 subpoena.